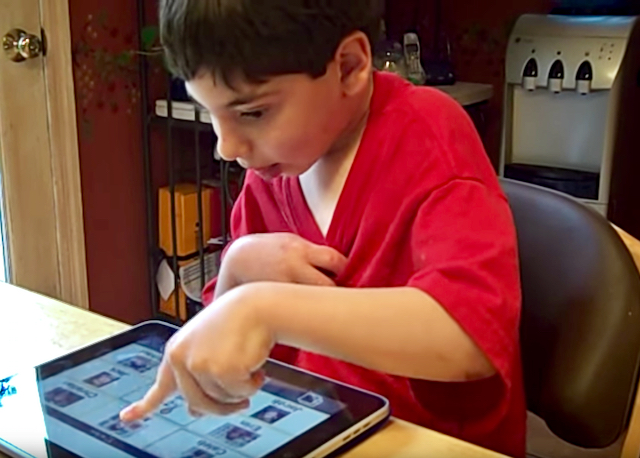 I read an article this weekend about a nonverbal teen with autism in Chicago, Mitchell Robinson, who until a few years ago relied solely on pictures and some sign language to express his wants and needs. Then his parents realized that he could spell. These days, he points to letters on a board to communicate and also uses an iPad that speaks what he writes.

"It changed everything because I could get my wants and needs met," Mitchell typed to a reporter from the Chicago Tribute, expressing his gratitude for spelling-based communication. "I am very happy people are finally figuring out how to reach people like me because it is a human rights issue he needs to solve. Mitchell's started a blog,Mitchell's Life with Autism, that he independently types on a keyboard.

The article brought back all the feelings about Max's relationship with alternative communication. My boy has always been a bright, curious and social child but when he was younger, he lacked the speech to express himself verballycerebral palsy messes with your muscles. Oral-motor challenges and muscle weakness in the head, face, neck and throat can hamper a child's ability to speak sounds, form syllables and articulate words. There's a host of associated medicalese: dysarthia, which involves trouble coordinating the muscles used for speech including the lips, tongue and vocal folds and apraxia, a condition in which the brain's messages for speech don't correctly make it to the mouth that can also affect children with autism. There's also dyspraxia, a condition affecting physical coordination that makes it hard to plan and process motor tasks including language (you can have dyspraxia without any other neurological abnormality).

Alternative communication started simply, when Max was in Early Intervention, with pointing to pictures of food and toys in a binder and laminated cards imprinted "yes" or "no." He went on to use a Dynavox, although at the time it was too heavy for him to carry and clunky for parents to program.
Over time, Max communicated through an expanding vocabulary of spoken words and gestures.

In the spring of 2010 (cue the angels singing), the iPad came out. By June of that year, thanks to his progressive-minded school speech therapist, Max was trialing it and the Proloquo2Go speech app. This was also a major developmental advance because the iPad encourage him to isolate his pointer finger, no small thing for a child with spastic cerebral palsy.

The first time I saw Max try the speech app, he gleefully told me who his best friend was.
I have never stopped being grateful for the iPad and the world it opened up for Max (when Steve Jobs passed away, I paid tribute to him for inventing it). These days, Max uses the TouchChat with WordPower app mainly at school; at home, he is all about using his Apple watch. He isn't able to coordinate holding a phone and pecking out words, but he can do it from the watch. So basically he's now enabled to text me every hour or so that he wants to move to Los Angeles, aka his "home." 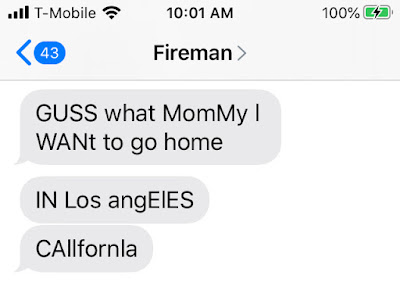 This weekend, Max's Early Intervention physical therapist stopped by the house, and Max texted me while I was chatting with her on our porch. I showed her the text. "If you would have told me back then that someday Max would be texting me, I'm not sure I would have believed it," I told her, and we both smiled.

Listening to a person who uses alternative communication, whether they're typing out thoughts, using speech to text or eye gaze technology, takes patience and a little extra time. But technology continues to evolve. I've been keeping my eye onthe Voiceitt app, which is in beta testing. It learns a person's unique speech patterns and then translates them to speech and text on an iPhone or iPad. Exciting, right? Max has never mentioned his appreciation of communication technology, but as his parent, I know just how game-changing it's been.

"I think people need to stop underestimating us because our perspective is as important as everyone else's," Mitchell Robinson said. "We are intelligent and amazing people who deserve the benefits of open communication."