During the first few years of my subscription to Martha Stewart Living magazine (and in my excavation and accumulation of her back catalog of issues) I came to realize that the September issue was one to look out for. It was traditionally an issue dedicated to decorating, organizing and getting one's life back into order: simple weeknight recipes, entertaining ideas, streamlining routines, fall updates to interiors. It quickly became a favourite of mine, and I count the September issues in my vast collection of Martha Stewart Living magazines among my favourites of all time. I was so delighted, then, when I saw the 2021 issue in my mailbox. The cover, with its gleaming arrangement of round copper platters in Martha's studio kitchen at Bedford and the glossy copper masthead told me this was going to be a good issue. And it didn't disappoint. The issue is filled with everything you want in a September MSL issue: decorating, easy dinners, lots of Martha content, gardening and organizing ideas. 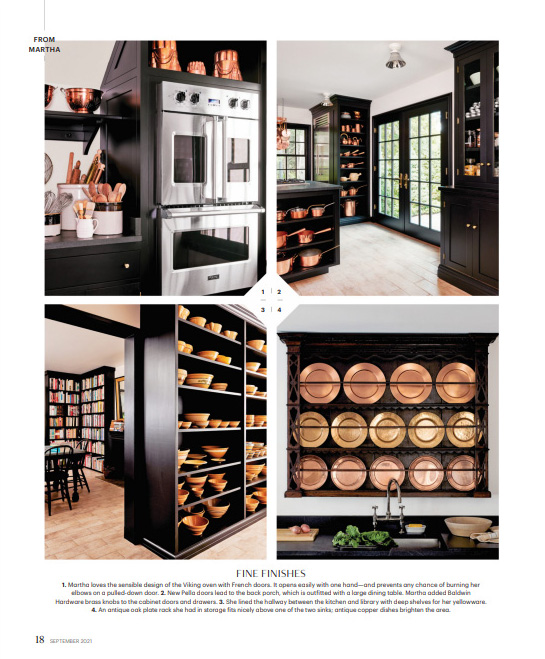 The cover image is an allusion to Martha's column in the issue, in which she details the renovation of her studio kitchen in the Maple Avenue house on her property in Bedford, New York. It was not a complete gutting of the space, but rather a simple refresh that involved new paint colours, new doors, shelves and appliances. The look is classic but modern with graphic elements that give the space definition. Martha moved her copper collection here from her main kitchen in the Winter House and it looks beautiful silhouetted against the new black shelving. 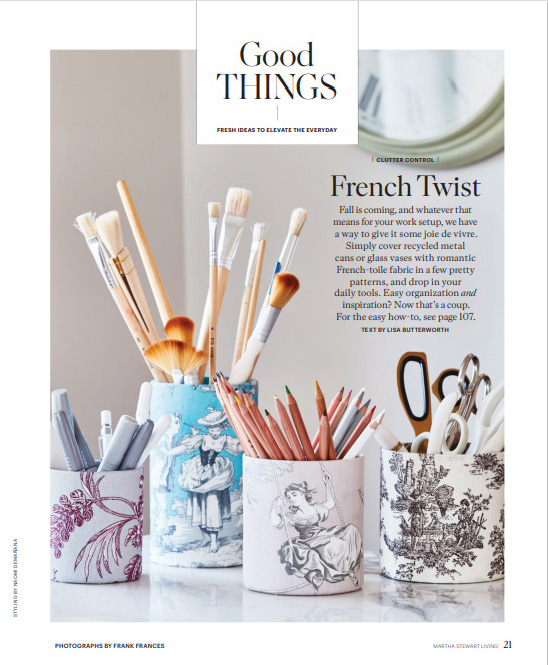 The Good Things column has a nice assortment of ideas to adopt this fall. From the home office to the kitchen, it's filled with fun ways to update old standbys, such as these toile-wrapped desk cups to hold pencils and other supplies. There are also instructions on how to refinish old wooden chairs and icing piping techniques. 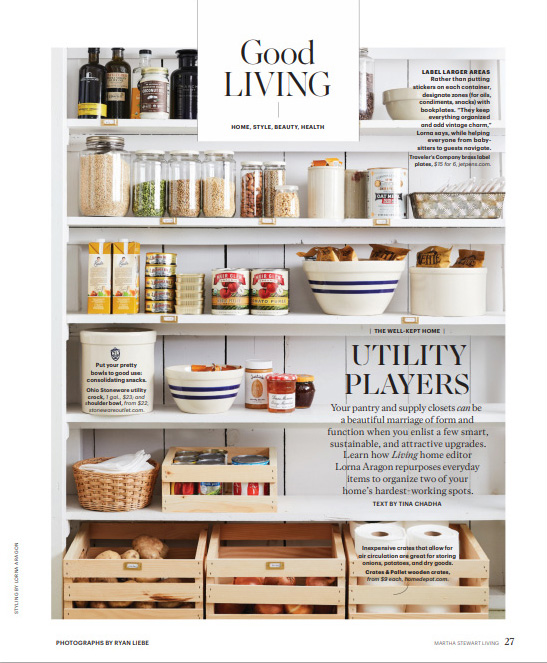 The Good Living section continues the theme with its tips on how to organize a pantry. Living in a city apartment where space is at a premium, pantries are not really a thing. And yet there are several ideas I intend to apply to my 'cupboard pantry' - particularly decanting my baking supplies (flour and sugar especially) and upcycling glass jars to use as storage for dried beans and lentils. 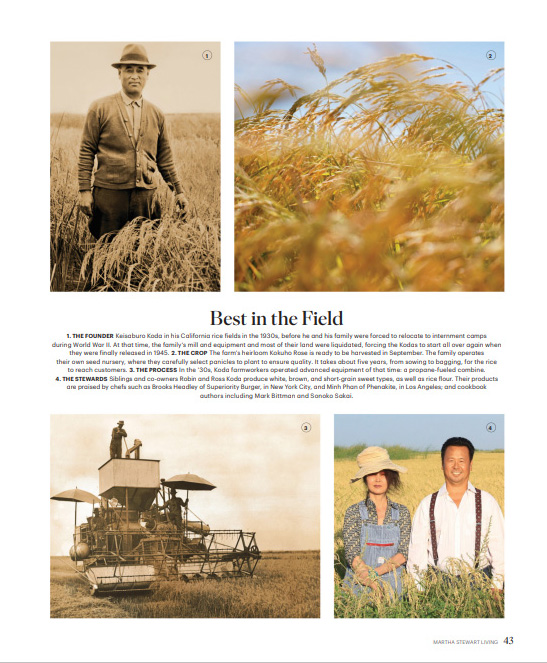 I really enjoyed reading the American Made column about Koda Farms in California, a rice farm founded by Keisaburo Koda in the 1930s. He and his family were forced to relocate during the internment of Japanese Americans during the Second World War but were determined to start again after they were released in 1945. The family now operates their own seed nursery where they carefully select panicles to plant to ensure quality. 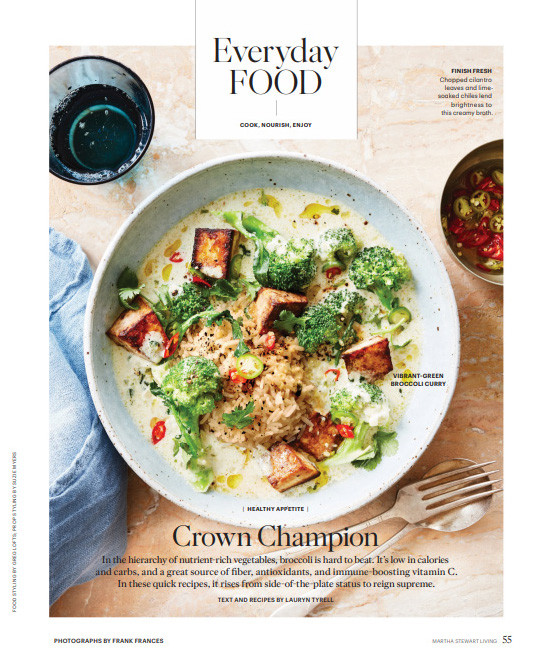 The Everyday Food section is an ode to broccoli, that gorgeous green cruciferous vegetable that most children find appalling. The article made me realize how infrequently I buy broccoli at the grocery store and the recipes included (broccoli curry, broccoli frittata) gave me more incentive to do so. There are also recipes for granola and four variations of patties to try on burger night, including vegetarian options. 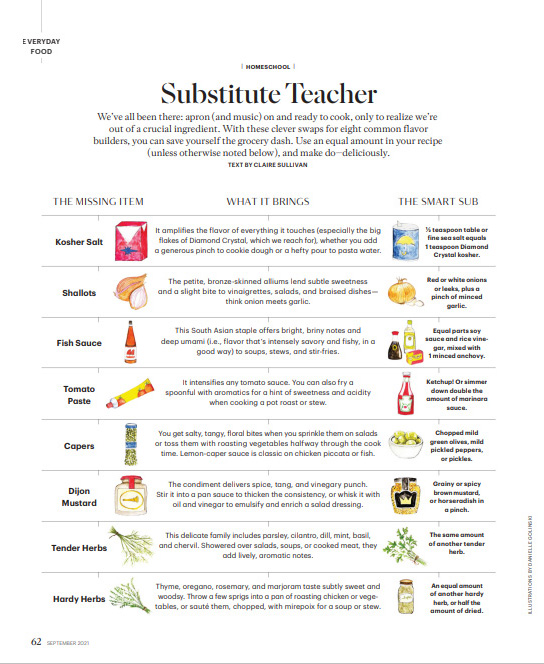 This substitution chart from the Everyday Food section  has been printed out and now resides in my recipe binder. I find it so helpful! Capers are not a regular staple in my pantry, but green olives are: simply chop mild green olives, mild pickled peppers or dill pickles to get your substitute. Brilliant! I love simple solutions like this. 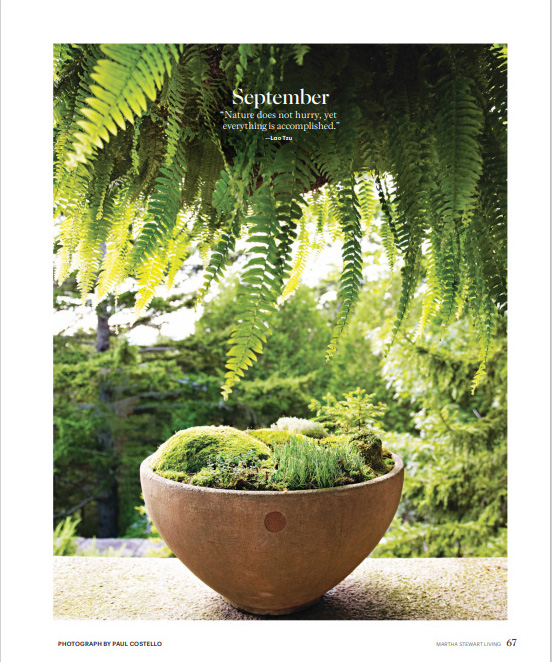 The splash page with its photograph of a planter at Skylands, Martha's home in Maine, has a wonderful quote worth jotting down somewhere: "Nature does not hurry, yet everything is accomplished." - Lao Tzu. How true that is. Nature teaches us patience and reassures us that in time all will come to pass as it should. 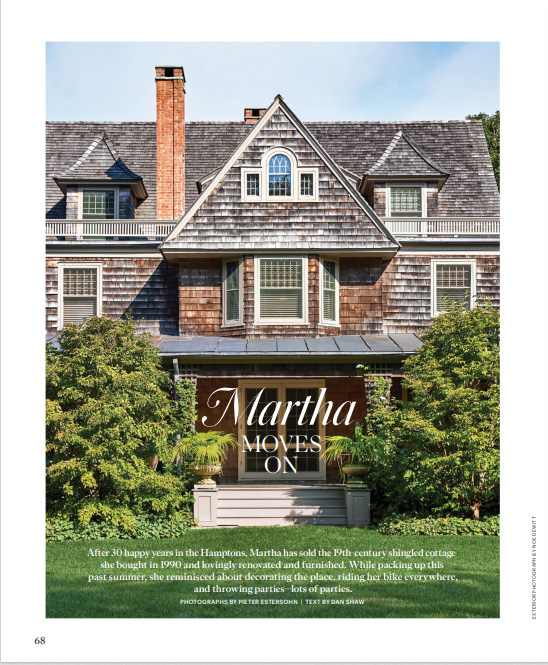 The centerpiece of this issue is the eight-page feature about Lily Pond Lane, Martha's former home in the Hamptons, which she sold this past summer. It is a beautiful celebration of the home she purchased in 1990 with all new photographs by Pieter Estersohn. Longtime fans of Martha have surely fallen in love with this historic house over the years; it was featured in many of her books and television shows. The feature takes a loving last look at the interior spaces as Martha imagined them. This feature alone is worth the cover price. 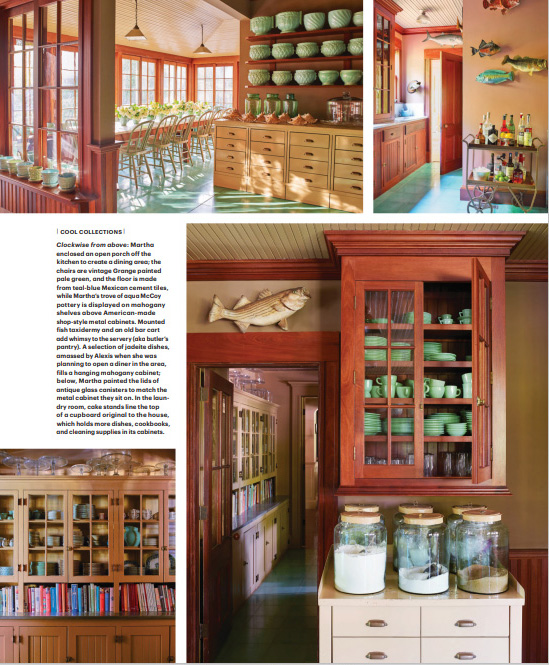 Many spaces in the home that had been previously unseen are showcased in this article. 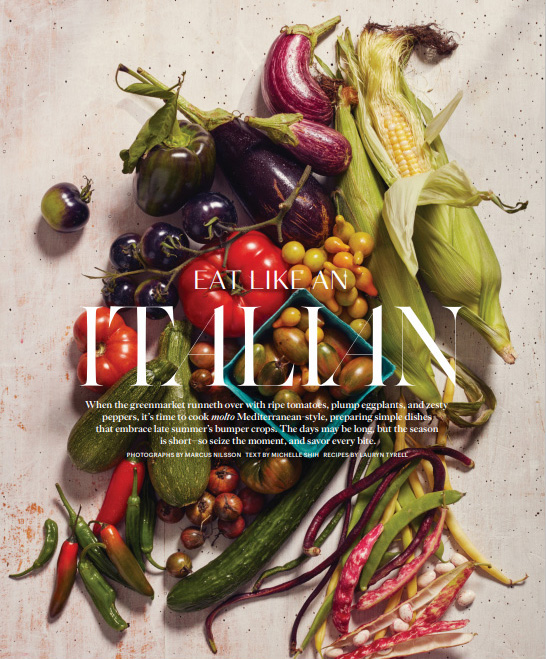 The main food feature is a great celebration of that late-summer bumper crop: tomatoes, eggplants and zesty peppers. The food editors have put together a series of rustic Mediterranean-style dishes that are simple enough for weekend dinners and elevated enough for entertaining, using all the best seasonal ingredients. My personal favourite: risotto with herb pesto, potato, and green beans. Yum! 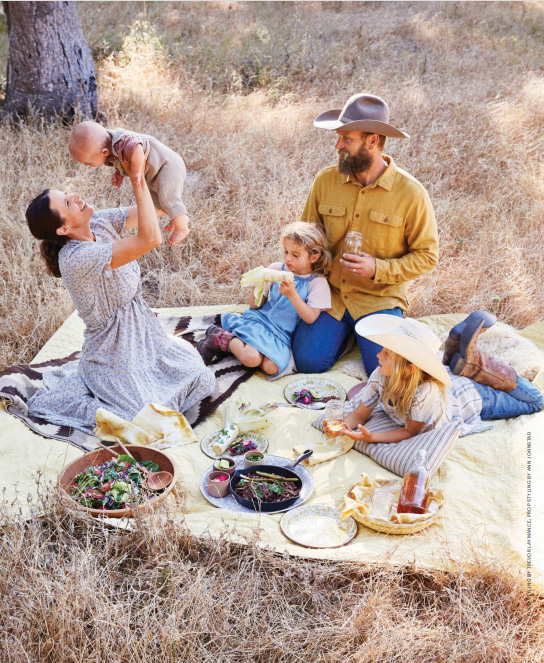 "Cool Ranch" is a pretty feature about a remote ranch in Santa Barbara County in California and the family who runs it, producing their own produce, raising a passel of farm animals and tending to their honeybees. It's a nice piece about self-sufficiency and sustainability. 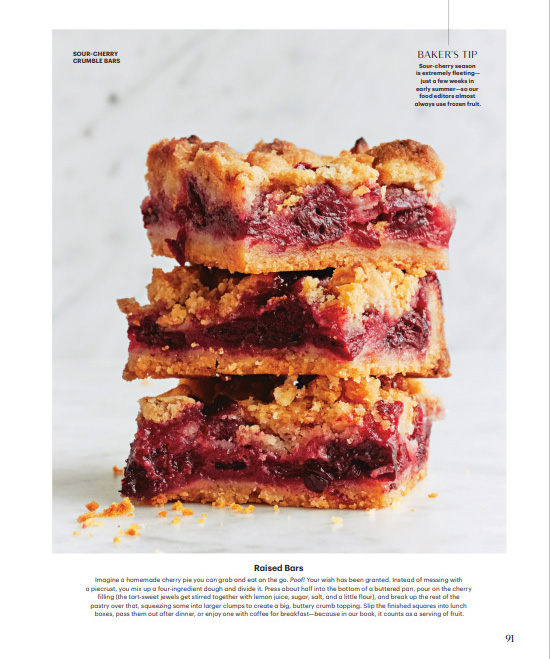 Martha's 99th book will be published on October 12th: Martha Stewart's Fruit Desserts. The magazine features an excerpt of six recipes from the book, including these sour-cherry crumble bars, which I highly recommend! I made them the weekend after I received the issue in the mail and they were a huge success - and so delicious. 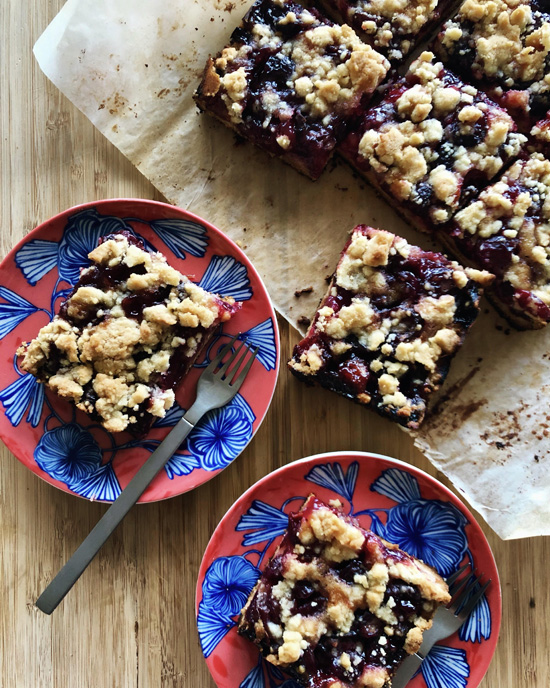 I used sweet cherries instead of the sour cherries called for in the recipe, which are very difficult to find in Canada this time of year. I simply reduced the sugar in the filling by a third. They turned out great! 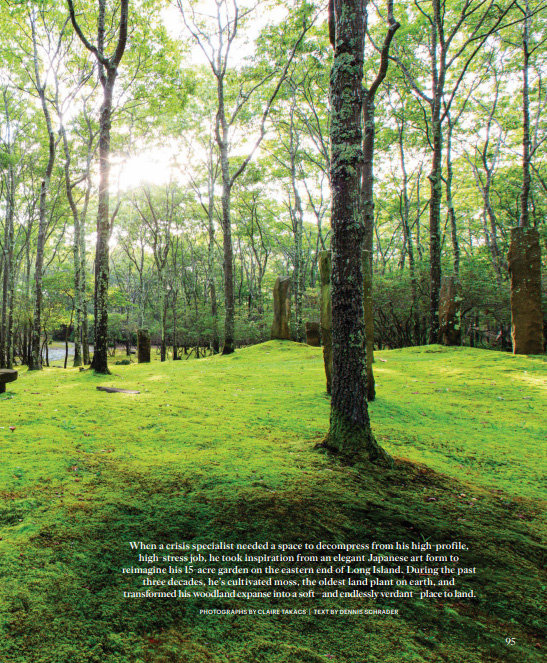 This expansive moss garden in upstate New York was so beautifully photographed by Claire Takacs. Undulating berms covered in varieties of soft mosses look so magical. It is a beautiful closing feature. 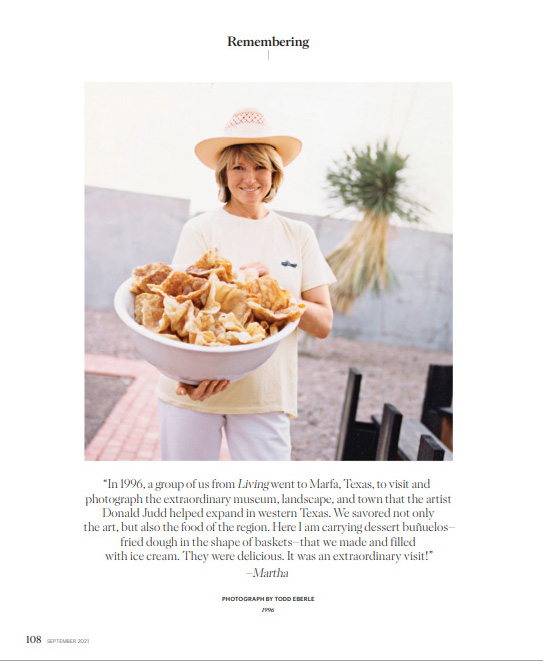 Martha's Remembering column is a fun reflection on a photoshoot she did in Marfa, Texas, in 1996 where she made a big batch of dessert bunuelos - fried dough in the shape of baskets, which she later filled with ice cream. How decadent!
In summary, this may well be one of the best September issues every published by the magazine. I don't say that lightly, either. I certainly count it among my favourites now!
SEPTEMBER ISSUE HIGHLIGHTS
Favourite Good Thing: Toile-wrapped desk cups, page 21
Favourite Recipe: Sour-cherry crumble bars, page 91
Favourite Find: Osaka three-handled dustpan, page 28
Favourite Feature: "Martha Moves On" page 68

Site Recon for Tactical Prepping and Bugging Out
September 17, 2021

Pros and Cons of Quartz vs Granite Countertops: The Complete Rundown
September 16, 2021