Spoilers for people who have not read or seen Greta Gerwig’s Little Women!

There’s a lot to love in Greta Gerwig’s movie version of Louisa May Alcott’s Little Women, even for a curmudgeon like me. I wasn’t hugely fond of the book when I read it, but was enticed by the glowing movie reviews. I was splendidly surprised by the film but most of all was entranced by the last part when Jo gets to watch her book being made. In the movie, we get to watch, step by step, the book being made. Apparently, I wasn’t the only one to have strong attachment to the scene, several other people noted that the scene was very emotional for them.

Since I had the opportunity to go to the Colorado Antiquarian Book Seminar last summer, I had a passing familiarity with what was going on, but I wanted to learn more. I discovered that Devon Eastland, Senior Specialist, Early Printed Books, Science, Medicine, & Travel at Swann Galleries, was behind the amazing scene. Not only did she make the book and paper props, she was also the person filmed in the scene, even if she was dressed as a man.

Eastland has been interested in the wonderful world of bookbinding and book repair since college. She became involved with movies when she was brought on by property master David Gulick for The Crucible (1996), where she made some books and paper for the film. She was brought on to Little Women two years ago and ended up providing them with materials seemingly once a week. Eastland made journals drawing on Louisa May Alcott’s journals at the Houghton Library at Harvard, Amy’s portfolios for her drawings, and more.

Making a Facsimile of Little Women 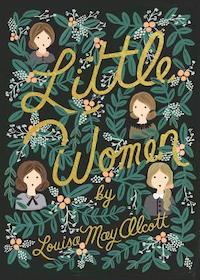 The film also needed a facsimile reproduction of Little Women itself. This required some problem solving, but she said: “I bought a second edition of the first part of Little Woman because it came two octavo volumes…It is identical to the first. I bought one of those, it was not in good shape. I took it apart and scanned the entire book, cleaned it up InDesign and printed it” on the same size paper. She sewed and constructed it together like the original work, though the film wanted it in leather, whereas the original was bound in cloth. She made two copies, which is typical because “one is none because things got lost or damaged.”

When it was done, Eastland dropped it off, figuring they wouldn’t need her anymore. She says “it’s an honor to be involved at all” and happy to help provide some historical accuracy. She then was then told they wanted to have this end scene with the creation of the book so she created a photo essay of the steps of the bookbinding.

Then Eastland gets word that “they need a bookbinder in the movie. You can be the bookbinder.” While she wasn’t an actor, she felt “it was really awesome to be called in to do that at the end.”

Bookbinding in the Film

Here’s a very abbreviated, non-comprehensive explanation of the bookbinding process in the film, per Devon Eastland.

First, there is the printing and the folding of the paper. In this case, the book was printed in octavo, meaning that for each sheet of paper, there were 8 pages printed on one side, and 8 pages on the back. (There are other sizes such as a quarto, duodecimo, etc.).

The bookbinder will fold the sheets into 8ths and tear them with a bone folder. Often times, there will be symbols on the pages, often numbers, letters, even Greek letters or other symbols, or a combination thereof to help the binder know what order the pages should be bound together.

Next, the bookbinder has to prepare the sheets to be sewn together. Eastland explains: “Sewing on recessed or sawn in cords is a method for sewing a book. With this method, the binder assembles the folded sections or signatures of the book, puts them into the press with the folds projecting out slightly, marks the channels to be sawn, and then saws them, one channel for each sewing station, and one at the head and tail for the kettle stitches. The binder then sets up the sewing frame and sews the signatures from back to front, one at a time, just in the same way as with books where no channels are sawn.”

Then the spine is glued, often with animal hide glue, and then hammered down, which helps drive the glue in and helps with the shape. Linen lining is added to the glue on the spine that will be used later to attach to the case, or the covers. A folded paper tube, often made from waste paper, is pasted to the line, Eastland says, creating “the hollow back spine construction.”

Next there is the case construction. Eastland explains: “Case construction is a method of binding wherein the two boards and spine lining are covered with the covering material (which can be paper, cloth, or leather) and then the “case” is attached to the textblock. In older forms of binding, the boards are attached to the textblock by means of lacing the slips of the sewing support into the boards first, and then the textblock (with boards attached) is covered with the covering material.” Eastland used leather and then used wheat paste to bind it all together.

In the final section, “[W]e did the gilt stamping to the case before it was attached to the textblock,” Eastland says. “When they show a stack of books in the press, and then I unscrew the press, remove a book and hand it to Jo, those are books that have been cased and left in the press to dry. After the case has been attached and dried, it is removed and the endleaves are pasted down inside the boards… [T]hey are left to dry under medium pressure overnight. Because of the tooling, one does not exert heavy pressure at this stage.”

When thinking about the first edition facsimile, Eastland felt strongly about keeping the original dimensions of the book; it’s basically 4 by 6. While part of it was the desire to keep to the history of it, it was also symbolic to Eastland. Like Jo (and Alcott), women wrote at the time but were given these “crumbs” to subsist on and are often forgotten. But Alcott’s work “has become something else…it took on a largeness. It was a small thing then, but it’s bigger than its size. Keeping small is an important way to try to remember that it was small, and she made it into something big by with what she did.”

Ultimately, Eastland sums up her experiences with Little Women: “There [are] a lot of us in the community of books, who love the book arts and have dedicated our lives to keeping books present in people’s lives, and understanding the history of the book and the contributors, it’s wonderful when anything go out to the wider public people can see the history of the book, that it is a handmade thing made by people.”

If you want more Little Women, here is a list of great quotes from the book.

Get to Know You Activities for the First Week of School
August 08, 2022