Sottobosco , Nicolas Party’s current show at Hauser & Wirth Los Angeles, connects the natural, the scientific and the art historical. When I looked up the Italian word “sottobosco,” I found a few meanings: in terrestrial habitat, it means “under the woods, or undergrowth,” and in wine, “the aroma of frutti di bosco,” which translates to “fruit of the forest.” Along the same thread, Sottobosco is the name for the Dutch Golden Age still-life painting sub-genre devoted to the botanical study of nature’s dark terrestrial regions. Resonating with undergrowth, this exhibition adroitly studies natural elements and portraiture while alluding to the historic lineage of zoological study. The works illustrate the shadowed world of the forest floor where the light doesn’t go because of the tree canopy; here, a particular life unfolds in darkness. Party references a world where, “places are maybe different, more intriguing.” The walk-through format of the exhibition itself creates a phenomenological urge to look, to examine, and to see. Since the exhibition is currently suspended due to COVID, a video produced by the artist and the gallery is an excellent alternative format for viewing the show.

The Sottobosco painting genre has an interesting origin. It began with the painter Otto Marseus van Schrieck, and one work by the artist is on view at the gallery. The microscope was invented during the artist’s lifetime, in the 17th century Dutch Golden Age, and this shined a light on things previously unseen. With this tool in hand, Marseus painted subjects considered unusual or taboo for artworks typical in Dutch still-life. He incorporated natural content that had previously been considered inferior or simply not worthy as the subject of artworks, compiling pictures of lively interactions between lizards, snakes, snails, and butterflies in the shadow of relevant flora and the odd mushroom. With a penchant for rooting around the undergrowth, and as an active compatriot of both the scientific and the artistic community, Marseus lead this dark realm into the artistic pantheon with exemplary “forest-floor still life,” or Sottobosco paintings. The work was soon expanded upon by Dutch still-life painters Rachel Ruysch and Willem van Aelst. It is a testament to Party’s inquisitiveness and inclusiveness that he treats the visitor to an inspired rumination on a meritorious part of art history in this show. The gallery center features a chapel-like structure formed of faux woods and marble, which for the backdrop for Marseus’s Three Snakes, Lizards, and Toads, a 1663 work that is a prime example of the style’s origin and one of Party’s muses in the exhibition. 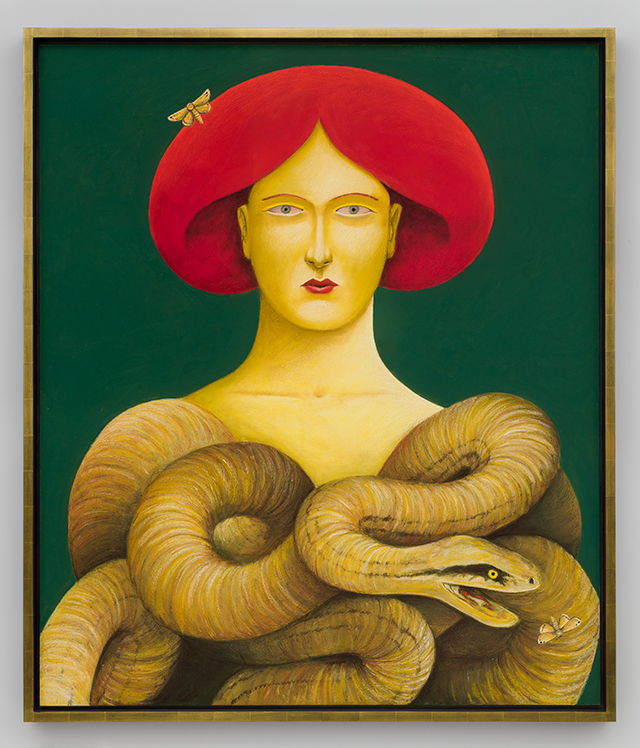 Similarities between the 17 th century and 21 st century timelines abound. Both Party and Marseus are respected integrators – interested in how people, places, and atmosphere combine to be productively fruitive. Arnold Houbraken's biography mentions that Marseus joined the Bentvueghels, a Dutch word for birds of a feather, a Roman society of Dutch and Flemish artists active in the 1600s. Marseus was referred to by the group as the snuffelaer, always ferreting around the garden looking for details to paint. He was closely informed by the culture of scientific investigation and fostered reptiles in a shed at his house and on a piece of land outside the city limits walled in for this purpose, creating a microcosm for these creatures. In forming the exhibition, Party likened the experience to a kid drawing a world and described, “When you are a child, as soon as you draw this circle on a piece of white paper, this piece of paper that is nothing to you in the first place starts to become a landscape.” Continuing, “Then you do a tree, and that’s it. You just created your entire Hollywood movie. Then you can just put a few lines and dinosaurs come in. It’s the simplest thing to do.”

Trees are a theme of the artist’s work and the installation features species-specific portraits, caves and landscapes. In the exhibition walk-through hosted by the gallery, Party described, “I think we can all argue that trees in the 20th century became almost one of the biggest symbols of our anxiety for what is yet to come for our planet. And it's been the case for a millennium, that this object had been perceived by humans as a vessel for all our dreams, fear and input.” Locating a zeitgeist in the language of plants and animals, Party directs the viewer inward, toward the atmosphere of the often overlooked and mysterious. While he uses bright colors in his work, the Sottobosco is a darker region, something interesting to explore in Los Angeles, a city of sun and bright life. In echoing LA’s darker or private moments, Party described, “I think in any bright place like this one, there's also a lot of dark areas and dark corners that we're all aware of. There is a little bit of echo to that in the show.” 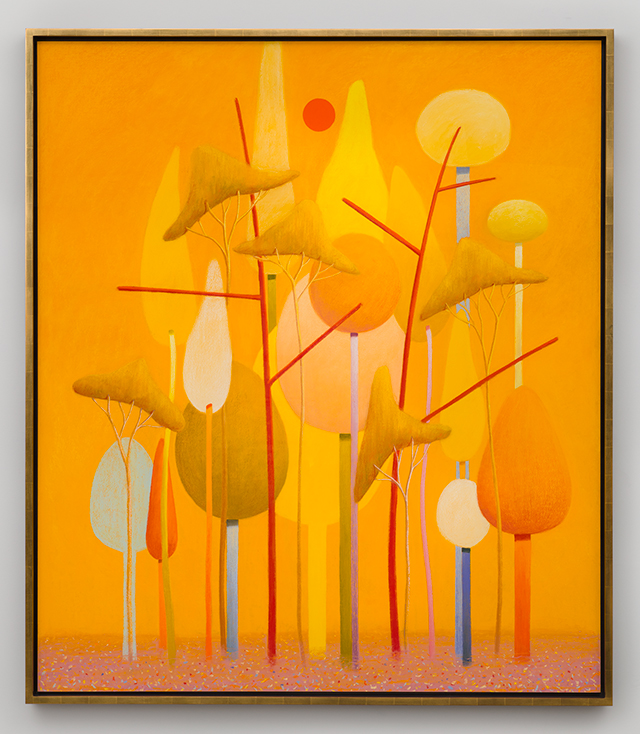 The show contains four portraits installed nearby the murals. The portraits (neither looking male or female) include snakes, mushrooms, frogs, and flowers and make reference to the Sottobosco painter Rachel Ruysch, a Flemish artist from the 17th century who began her painting career after Marseus. Ruysch was an incredibly successful painter and her commissions were more expensive than Rembrandt’s during her time. Party incorporated his own renderings of flowers painted by Marseus and Ruysch throughout the show, as he, “thought it was a beautiful, poetic object to have, his flowers and her flowers joining in one painting, and my copying the copying of the copying.” Copying being a theme of the art in general. There is something interesting about these poppy flowers presented from the back, which is unusual to see in flower paintings. Obviously, a flower is an object that is trying to catch the light, with some flowers even turning during the day. The back of the flower is the part that doesn't get the direct light and is metaphoric of Party’s underworld meditation. This important theme joins all the pieces of the show together in a poetic way. In this interpretation of poppies, I sensed Party has begun showing another layer of his depth and capability.

A major work, Portrait with Mushrooms, 2019, depicts a front-facing portrait of a face with moths or butterfly specimens doting the hair and mushrooms in the foreground. Illustrating the figure with natural hues, the portrait depicts flora and fauna particularly associated with processes of growth and metamorphosis. Through a range of approaches–a physical object, a memory, and a psychological reality—Party unfolds a conversation about surface and what is beneath the superficial. The artist is well-known for critically parsing and playing with what one sees. Pastel work layers the surface of a canvas, like make-up, and beckons the viewer to consider things that lie under the surface. Working in pastel for a bit under a decade, Party began researching the medium while preparing for a show at the Flag Art Foundation. He discovered that pastel first became popular because of Rosalba Carriera, a Venetian Rococo painter, who coincidentally worked in the 17 th century around the time of Marsius. Carriera is known for her innovative approach to pastels, a medium which had previously been used for informal drawings and preparatory sketches. She is credited with moving pastel into a position of serious portraiture that redefined the Rococo manner and started a major trend within the art scene in Paris. In oil painting, to that point, there was not yet the technology of the oil tube, so one needed to have a studio. Male artists went to the Academy. Women were not admitted at the time, so many began to use pastel as the medium, a bit like watercolor, which made it possible to work from the close quarters of home. His interest in, and reference to, the historicity of materials is a charming hallmark of Party’s. In being aware of their forebears, the portraits smart with psychological impact, reverberation, and resilience. 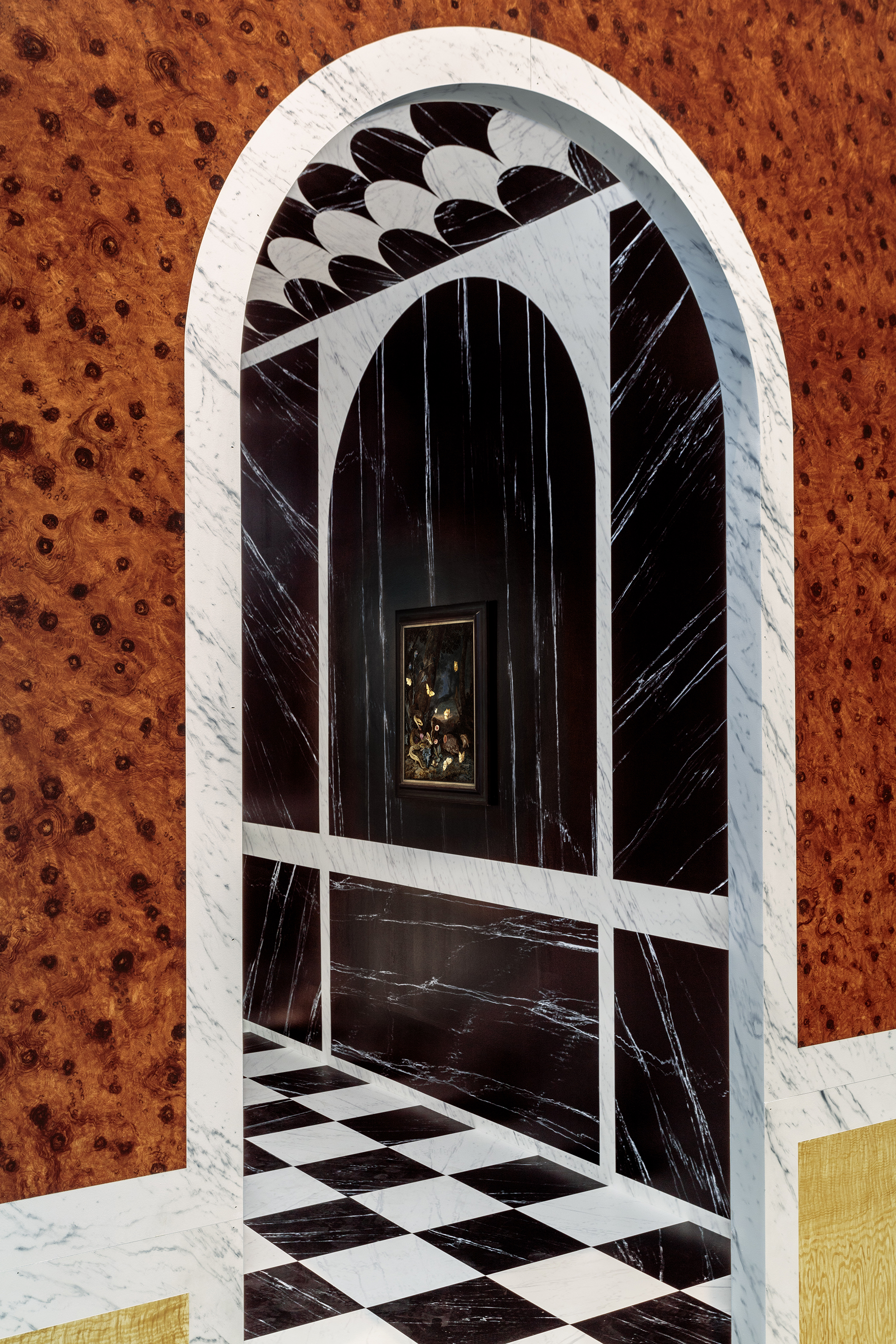 The exhibition includes another rarity: two wall-based murals of caves rendered in pastel. They forge a link between the forest floor and another geological site where little to no light reaches, the cavern. Large-scale murals are an ability of Party: last year he was awarded an RxArt commission to create a mural for the Children’s Hospital of Los Angeles, which is scheduled for completion in 2020. The cave murals on display at Hauser & Wirth, Los Angeles provide the viewer with an opportunity to focus on the physical, yet transient, quality of the pastel medium. In his exhibition talk, Party noted the powdered nature of pastel, saying, “You can really see the particular powdery velvety medium. Pastel is basically a stick of pure pigment, and a bit of binder. It is the purest form of lasting color. Physically, a butterfly wing is covered by powder that is quite similar to a pastel stick, and if you move this dust, they cannot fly anymore. If you blow on (the drawing), it will disappear, so we have those little ropes (stanchions). If I was touching it, it would totally rub off from the wall. There is a slightly poetic connection with the butterflies, in some of the paintings, in that the wing of the butterfly has this incredible dust. It is a mesmerizing design of nature.” It is a treat to see pastel at a large scale without glass. The cave work, which is a new subject that the artist has been exploring over the last year and a half, is a broad, metaphorical theme, referencing many fables, philosophic tales, and aspects of art history. With this in mind, one reference that seems apt is Plato’s story of the cave, referencing illusion. Party works themes that have been used often, over a long period of time and are charged by many stories and meanings. In closing, Party states, “I somehow feel much more relaxed to work with them because I feel like they've been proven to be good and proven to be charged. I really like playing with these themes.”