As I said in my earlier post, I needed to use my last three eggs before they expired. Well, the Irish Butter Cookies only used one egg, so I needed to find something else to bake. I had pecans and marshmallows left over, and while the pecans would keep for a while, the marshmallows were starting to harden up a bit. I didn’t want to make another cookie and after all the time it had taken me to roll and cut out the dough for them, I wanted something that was fairly quick.

My sister’s favorite dessert was a brownie. They weren’t necessarily my favorite, because as most of you know they can tend to be a bit dry or too dense. I would usually only eat the end pieces, because I like a bit of crunch on my brownie. My mother had two recipes for brownies typed up in her red binder, but I discovered that my Baker’s Chocolate had dried all out. If this ever happens to you, don’t worry. You can substitute three tablespoons of unsweetened cocoa powder plus one tablespoon of butter, vegetable oil or shortening for the one ounce square of Baker’s Chocolate.

So, I had already taken out my butter and eggs and brought them to room temperature while I was making the Butter Cookies. Since cocoa powder can absorb moisture and clump, I always sift it. Remember, sifting blooms dry ingredients, so you need to measure, sift, then remeasure your ingredients to avoid a dry batter.

As I was pulling out the remaining ingredients for the brownies, I realized I could spice them up a bit and added cinnamon and cayenne pepper to make them a Mexican Chocolate Brownie. Add in the pecans (or walnuts) and marshmallows and what do you have…Rocky Road.

Brownie recipes usually instruct you to use an 8 x 8 x 2 inch pan, but you can use any pan you have on hand that won’t make the brownie too thin. I used a 10 x 7 x 2 inch Pyrex dish, but you could also use a round cake pan if that is all you have available. 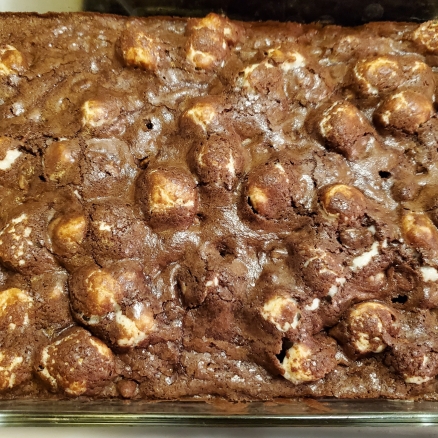 How Effective Financial Emergency Planning Can Bring You Calm
April 06, 2020