So it was pouring rain yesterday morning. Even the girls did NOT want to go outside. That's very unusual, but it was wet! However once the rain went away and the sun came out, people came out of their houses in droves! The girls and I went for a long walk and at some point, there were so many people to "dodge" on the streets, that everyone was crossing what is normally a fairly busy street at random intervals to keep our social distancing.

It was great to see so many people out - I just hope that people will realize how nice it is to walk and keep at it once we are through this crisis.

I've been diligently working away at the sewing machine and doing some tidying. I haven't fired up the long arm in a while, but that's OK. There's no rush on anything.


OH -- I'm going to start off the day with a question. In my tidying up, I came across this project. A TON of batik 2 ½" squares cut. They need a background. I found a HUGE hunk of this blue batik in the bag. It's not cut up but is supposed to be the background. 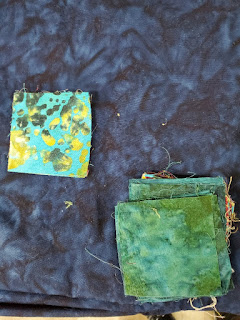 But what about white? I have so much solid white that I'd like to get it used up.

And I have huge pieces of muslin - would that work???


The original was done with a light background. I don't know that it matters to me and I like all three options. I do like the white option myself. There are two blocks to the quilt - the center of one block is batik and the next round is white and the final round is batik. The second block is the reverse. So the background plays a huge part in the quilt.

I've also been hanging out in Studio U enjoying the natural light from the windows and getting some handwork done. While I'm doing the handwork, I'm watching the first season (2007) of The Quilt Show (Alex Anderson and Ricky Tims). Somewhere along the line, I bought the first three series on DVD. I never watched them. So I borrowed a DVD player and I need to get them watched. I also have a stack of machine quilting and technique DVDs.

I do NOT understand my NEED (at that time) to own these things but never watch them. Why???  It's just a mystery to me and I spent so much money on this kind of stuff. Anyway - I'm thoroughly enjoying the videos. I don't have a need to watch the other seasons of The Quilt Show, but I'm enjoying the ones I have available to me.

The show is still going and you can check it out here on their website. There are a couple of free videos that you can watch as well. It's a subscription service but they have free stuff on their web site.

One of the hand things I'm working on is to finish the tracing and cutting of those seasonal wall hangings (designed by Patrick Lose). This is October. It's ready for the satin stitching.

And here are nine of the twelve. They are so darn cute and I love how bright and cheery they are!!!

I have to get some pet mats finished. There's a stack of them waiting by the serger and I just can't seem to get there in the day. But here's the cutting scrap box and it's overflowing - yet again! I think I have about 4 or maybe five of the bags left. Then I'll have to get busy and make some more. I certainly never run out of things to do!!!!


This pattern came to me in a box of stuff that I inherited I don't want the pattern - does anyone want it for free?? It was to support the Mennonite Relief Sale in 2016.


I inherited this block (from that quilt) which wasn't done very well, so I took it apart, cut the pieces so they were the same size and once I sew it back together, it'll go in the orphan block box.

It's a long time since my sewing machines and sergers were this organized. All the not currently used stuff is stored on one table. There's one more serger and one more embroidery arm missing from the table, but there's also no more room!! Those machines take up loads of space. I'm just glad they are all together.


It was time to get that binding made for Peaceful Year. I had to cut ELEVEN strips. That's how huge this quilt is. I put the binding in a plastic bag to protect it from fraying.

Then this quilt got added to the "to be quilted" pile and it was noted on the list in the red binder as well.

I spent a lot of time prepping the backpack project for the retreat. Holy - there are a LOT of pieces to cut. Main fabric, quilted fabric, lining and coordinating fabric, bits of foam, stabilizers, hardware. But it's done. In this picture, it wasn't quite finished. Notice how all the bits are labeled? It'll be way easier to make this one than the first one. I did NOT label any of the pieces which caused some angst as I worked on it. It took forever!!!

When that picture was taken, I still had all these pieces to cut. Each square was a label for something.


The project is now in the laundry basket. That was the LAST project that's going in the basket and while the basket is overflowing (well - it's heaped high), it all fit in one spot. All that remains is to pack some tools and basic supplies. That's for tomorrow. Just two more sleeps - I can hardly wait. Remember - this is a virtual retreat!! We might be silly, but we're not that silly that we'd violate the social distancing orders that are out there at the moment.

From the remainder of the quilted fabric, I've managed to cut some smaller pieces that'll work to make some zippered pouches.

I have to confess that I'm not a fan of the homemade masks. What's the point I asked myself? Well, here's a very good video that explains it a bit better. I'm good with anything if there's a good reason. While it can't guarantee 100% that you won't catch the virus, it can help. I wouldn't be surprised if when we are allowed out, that it'll be mandatory for everyone to wear a mask. EVERYONE!!

DH and I had a great discussion last night. I hope the same thing is happening in your house. We are actually sitting down (well we always do) for dinner, but our discussions are varied and well - entertaining! We've decided that we would not be upset to catch this virus. Not that we're going to intentionally endanger ourselves. But we're both healthy and the odds are in our favor that we won't die. That doesn't guarantee it - there is no guarantee to anything. But we're OK if it happens. You also have to realize that we're both high-risk takers and have been for years.

I found two patterns that you can make directly in the embroidery hoop if you're into that. Perhaps later today, I'll give them a whirl. Actually, Ronda found the one at the Kimberbell site and the other came in an e-mail. She made both of them yesterday. NO pictures. Here's the one from Embroidery Library.    And here's the one from Kimberbell.   Just scroll down the page to get the link.

It'll be fun to make one from some of the funky novelty prints I have. And if I never wear it - it'll be a reminder of this current situation. I don't think it'll make much of a dent in the novelty print stash.

I've been working on other stuff as well, but that's it for today. OH -- I should tell you that thanks to TWO of my readers, I was able to find my zipper tape from a Canadian source. The first one didn't have what I was looking for, but the second one did. And after much contemplation over the darn color, I placed my order. I paid the same price as I would have for the US order but at least it's in CDN dollars so I don't have to take the hit on the exchange.

I did have a chuckle as I placed the order. The zipper tape costs $10.79 in the US with $15 shipping. At the CDN site, the zipper tape was $15 and $10 to ship!  Thanks to all of you for keeping me honest. I should have KNOWN to search for a CDN shop to buy from since I'm always saying how important it is.

The big question is - will it get here in time for the retreat? The store (I'm not sure if they have a physical store or just online), is in Ontario so there's hope!!!