This is the most heavenly feijoa cake – cinnamon spiced and filled with pulpy fruit and toasted walnuts. Enjoy a slice on a cosy Autumn afternoon with a big dollop of coconut yoghurt – bliss!

This truly is the best feijoa cake I’ve made – it even converted hubby where previously he sat on team ‘not a feijoa fan’ (honestly, have never understood how anyone could not love ‘em!)

I’ve used oat flour with almond meal to keep it gluten free, and psyllium husks to act as a binder in lieu of eggs, though ground flax seeds also work a treat (have tried!).

The toasted walnuts are the most fabulous addition. I think next time I make this I’ll be adding a handful or two of sultanas for an extra pop of sweetness. Speaking of which – coconut sugar is the sweetener of choice here as it just so beautifully compliments fragrant feijoa.

It’s also a pretty fuss-free recipe – mix it up in one bowl, add chopped fruit and nuts and bake for 40 minutes.

I love a dusting of icing sugar to serve – powdered erythritol.

If you’re feeling fancy and have the extra time, then I can highly recommend the luscious cashew lemon icing featured on my Ginger Cake.

The most heavenly feijoa cake - cinnamon spiced and full of fruit and toasted walnuts - recipe here!
Click To Tweet

First up – let’s toast those walnuts. Scatter a cups' worth over a baking tray, and bake until they’ve browned up and released their delicious scent. Remove from the oven and roughly chop [pic 1].

Now slice and scoop out the flesh from the feijoas, and roughly chop – I much prefer larger, pulpier chunks in the cake [pic 2].

Pour over the oat milk (or your choice of plant milk), olive oil and vanilla, then fold together to create a medium-density batter [pic 4].

Lastly – add your chopped fruit and nuts [pics 5 and 6]. Just be careful to mix them in quickly – too much stirring will add air to the batter causing the cake to rise then collapse.

We want to bake this deliciousness for just 25 minutes, then very stealthily, whip open the over door and place foil over the top, to bake a further 10-15 minutes. This prevents the top from browning, but if you don’t mind a little crunch, don’t bother.

Now for the hardest part – to wait until entirely cool before digging in!

Store in an airtight container on the bench top for up to 3 days.

This feijoa apple crumble is a favourite around here, and healthy enough for breakfast. I’ve also got a fab feijoa muffin recipe spiced with ginger. Yum!

Pin this image and save it for later! If you make and enjoy the recipe, please leave a rating below. And better yet – leave me a comment to tell me how you got on, or just say hi – I LOVE hearing from you. Follow me on Instagram, Facebook or Pinterest to see more of my everyday recipes and wellness tips.

Lastly, if you'd like to learn about essential oils, reach out to me. If you need support with your health, book a Naturopathic consultation or a discovery call to see how I can help you. 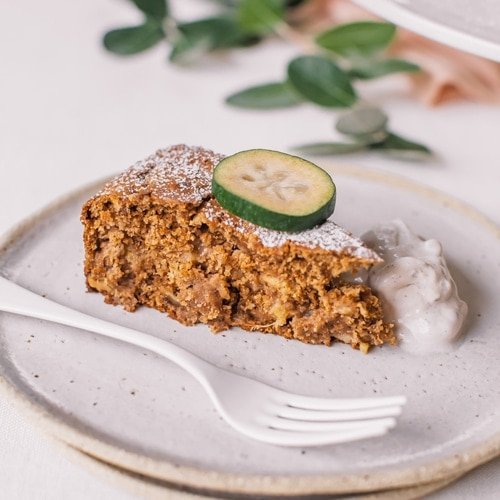 How to Hang Anything on Classroom Cinder Blocks
January 19, 2022