[FTC Standard Disclosure]  We received no compensation for this post. Any Amazon linked posts are Amazon Affiliate links and we will get a small percentage of sales to help cover our costs.

This weekend, we bought a 20-ounce, black Angus, cowboy ribeye steak from Butler and Bailey Market. We grilled it on the Big Green Egg and served it with some crispy skillet potatoes and black beans for a delicious meal. 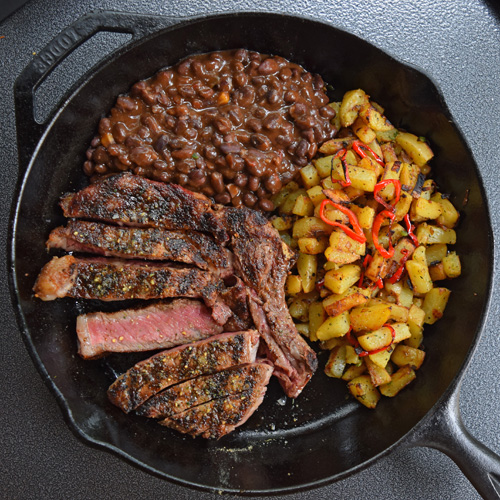 This was definitely a bone-in ribeye steak but it depends who you ask as to whether it is a cowboy steak. All three of these steak names come from the beef rib primal. The cowboy and tomahawk are both derivatives of the bone-in ribeye.

If this has you confused, don't worry. All three cook and taste the same. Just remember what Bill Shakespeare once said while pontificating about steaks on the grill - "A ribeye steak by any other name would taste as sweet."

This was a short, quick-cook and the grill setup was straightforward. I loaded a large Big Green Egg (the one in the Challenger cart) with a Kick Ash Basket full of Brazillian lump charcoal. I lit it in 3 spots for 30 seconds per spot with a propane grill torch. I left the vents wide open until the grill hit 300°f and then shut the vents down to about 1" open and stabilized the grill at 350°f.

The sides were rather simple.

If the steak was any thicker, I would have reverse seared it. But I was hungry and wanted to eat sooner, so I went with a simple direct grill of 4 minutes a side at 450-500°.

The steak was fantastic, one of the best we've done in a long time. The lively flavor of Kinder's Master Salt created an eruption of taste. I'd say it's the best garlic salt I've ever used and it translates quite well to the finished steak.

The crispy potatoes were crispy on the outside, tender on the inside. The Kinder's worked its magic on those as well.

The beans were tangy, savory, and didn't require any doctoring, they were good right out of the can. I always keep 2-3 cans of Bush Beans on hand for quick side dishes. It feels like I'm cheating but it always tastes good, so who cares? 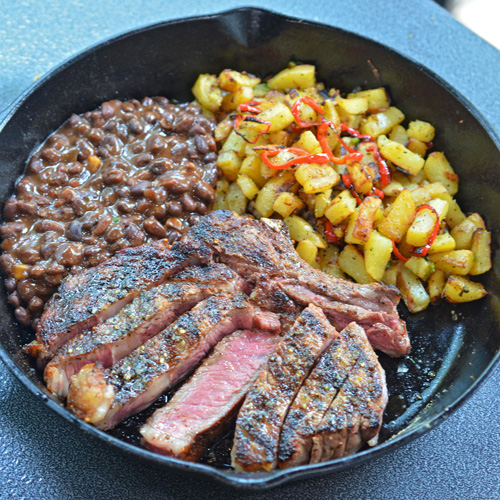 Keep the fires hot and the grates clean, my friends!

Get new posts by email: