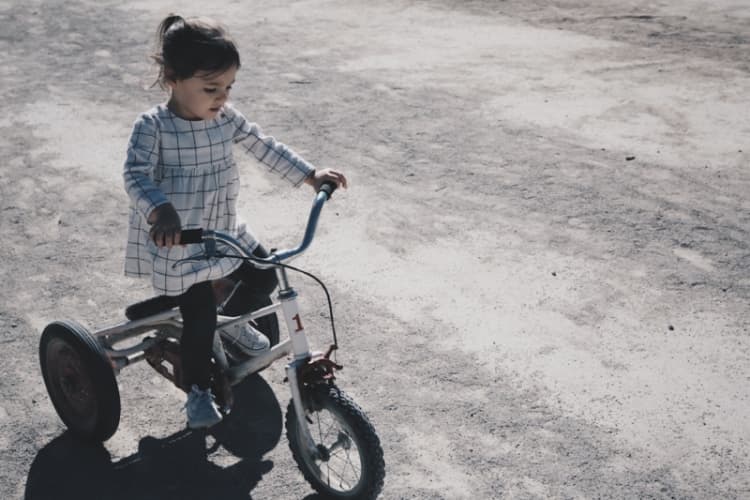 It used to be commonplace to teach children how to swim by picking them up and throwing them into a lake. Parents would perform this activity laughing while their children thrashed around in abject terror.

They justified themselves by saying, “That’s how I learned, and it didn’t do me any harm.”

Most learned, some drowned, and many developed a lifelong terror of water.

The ‘sink or swim’ instructional method represents yet another case where old school thinking is just a thinly veiled form of abuse. These actions are perpetuated by tradition, and because people don’t stop and think about what they’re doing.

Please, for the love of your children, stop and think for a second.

Even today, it’s not uncommon for parents to teach their children to ride a bicycle by finding a hill, placing the child on the bike, and providing a massive push. Sometimes the child coasts to the bottom of the hill. Sometimes the child crashes into the gravel and needs to be taken to the hospital to treat his or her road rash. 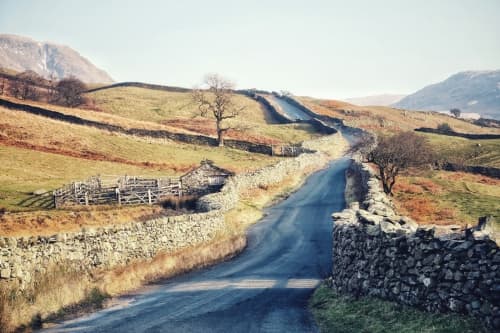 Photo by George Hiles on Unsplash

As a parent, you often feel helpless. Teaching your child to ride a bicycle is one of those times. It’s important to take a step back and recognize that although people say, “it’s as easy as riding a bike,” the ability is one of the most complicated things you’ll ever learn.

To ride a bicycle requires making hundreds of instantaneous adjustments in the balance of your body and the direction of the front wheel. Sitting down to do the math involved would place you among the preeminent mathematicians in the world. 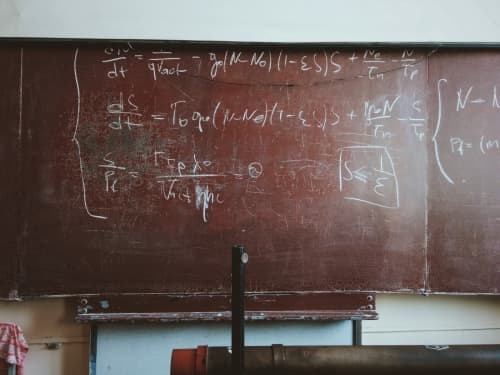 Photo by Roman Mager on Unsplash

Riding a bicycle is complicated.

Have some patience with your child.

The old school methods of tossing a child in a lake, or giving them a shove off a big hill approach the lesson like it’s a chore. The primary objective of these tactics is not the benefit of the child, but to achieve results as quickly as possible. 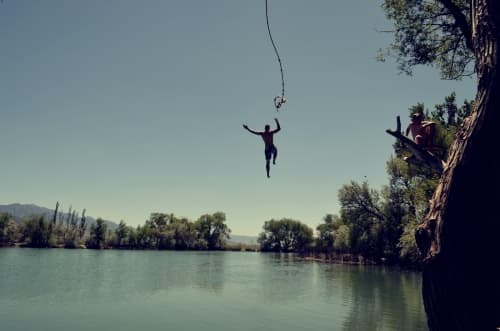 Photo by Blake Wheeler on Unsplash

The very first step to teaching your children how to ride a bike is to understand it will be a lengthy process. Approach it like a series of lessons. There’s a lot to learn, and you need to give your children the time necessary to familiarize themselves with every aspect of riding a bike.

It’s also important to keep in mind that the lessons of riding a bicycle are not of the “cram to pass the test” variety. You need to know and understand everything on a fundamental and almost instinctive level. When you’re cruising along at fifteen miles an hour, there’s no time to stop and try to remember what you need to do to stop. You have to know how to stop like it’s a reflex.

Your children will also have to develop the muscles necessary to control their bicycle. If your child has trouble walking their bicycle, they probably aren’t strong enough to ride it. Give them time. 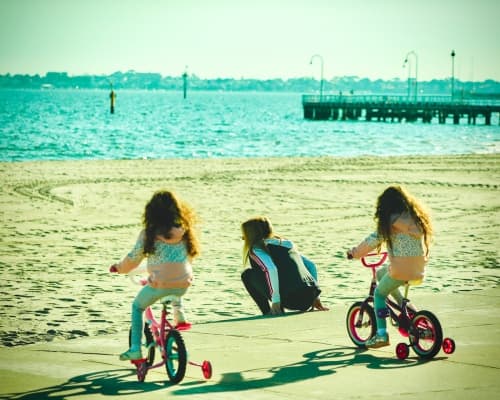 Photo by Lex Melony on Unsplash

Many parents perceive training wheels as a problem because the children don’t even try to learn balance. Instead, they become dependent on the wheels and scoot around with their bodies out of position secure in the fact that the training wheels will keep them from toppling.

A good drill when your children are riding with training wheels is to call out, “Break!” or “Stop!” The first couple of times you do this, the kids will panic and fail to break. You need to train them to the point where they react instantly and appropriately. You need to be assured they know how to stop themselves, because sooner or later they’ll be approaching vehicle traffic at velocity. 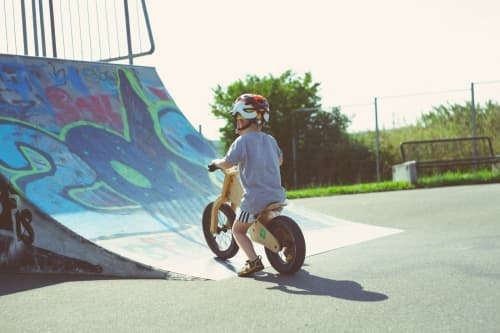 Photo by Markus Spiske on Unsplash

Today, the first bike of many children is a balance bike. A balance bike is a bicycle without any pedals. Many of them even have a platform for resting their feet as they coast. A balance bike allows a child to learn the nuances of steering and direction control without the distraction of pedaling.

A balance bike is a great way to learn and allows for a seamless transition into a pedal bike. However, some children don’t take to a balance bike. Every child is different and many children don’t intuitively develop a sense for the amount of force they have to apply to make their bicycle behave as they want it to. This sense cannot be predicted by gender, as every child has a different nature. It’s important to evaluate the needs of each individual child and embark on a training plan suited to them. 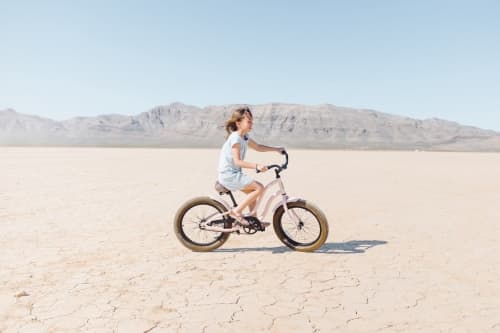 Photo by NeONBRAND on Unsplash

The best thing to do is to drop the seat to the lowest position and remove the pedals. This allows the child to push and coast which helps them develop a trust that the bicycle will stay upright. The inherent problem of riding a bicycle is that a bicycle is more stable at greater speeds, but novice riders don’t trust the bicycle to stay upright.

Removing the pedals allows the child to coast with their legs outspread so they can catch themselves if it seems like the bike is about to topple. This allows them to become comfortable with the feel of an upright bicycle and they will gradually increase their speed until riding becomes feasible. Lowering the seat makes it easier for the child to touch the ground from a seated position.

Photo by Artyom PJ on Unsplash

It will be easy to identify when the child is ready for the pedals. They will be pushing the bicycle at great speed and turning without difficulty. At this level, they will have mastered balance, breaking, and turning. The only thing that is left is increased velocity.

Learning to Ride Can Be Fun

You can expect your child to become frustrated, have a few crashes, and cry during the process. Learning to ride a bicycle is a difficult objective, and emotions will run high. Every child has a bicycle crash sooner or later, it’s just part of the process.

Teaching your child to ride a bicycle is an opportunity to instill many life lessons that will ultimately be far more important than riding a bike. The prize for the child is the freedom and fun of being able to travel at great speed. The prize for the parent is knowing you’ve taught your child how to handle adversity and emerge unscathed on the other side.

There’s no need to rush the lesson, enjoy it. Childhood goes by too fast as it is. 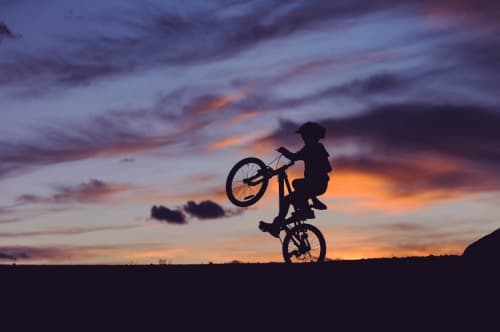 Photo by Clark Young on Unsplash

This post was previously published on A Parent Is Born and is republished here with permission from the author.
—

The post The Right Way to Teach Your Children to Ride a Bike appeared first on The Good Men Project.