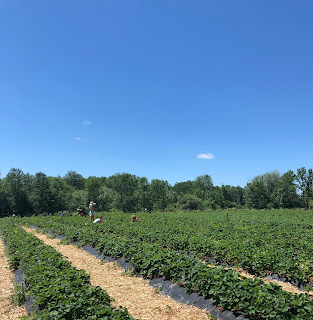 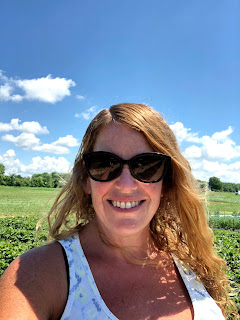 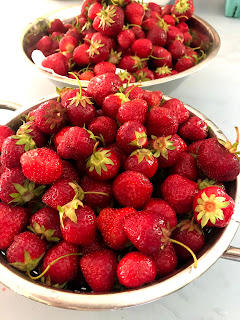 Four girls went picking with me, we came home with five quarts of the most delectable berries ever. They were so delicious, I decided it was worth breaking my fast yesterday, strawberries...warm from the sun, sweet, heavenly. We picked them at a local Mennonite farm. The girl working in the little store had to been all of twelve years old, barefoot with braids and a pretty dress on. She had such a sunny disposition, and she figured out that math like a pro, counted out the change, and wished us a very nice afternoon.

Home, and a nice afternoon swim in the sunshine.

Dinner: pork chops hot from the grill. The girls wanted "bowls", which we usually make with grilled chicken, but they cut up their chops and had them with the rice, cilantro, fresh salsa, chopped tomatoes and peppers, ect.

Abigail and I got up early and went to Target and Aldi. Aldi had ground beef marked half price, so we got lots. I made it into hamburger patties and froze them. The pork chops were marked down too. They had cherries for $1.99 a pound, and salt potatoes for $1.99 a bag. I do like Aldi. Their fresh salsa is SO good.

Today, it's mowing-the-lawn day. I promised the girls an outing if they helped (when I say "help", I mean that they'll mow the lawn, of course). I hope to sneak a trip to the thrift store into the outing...

It's quiet here, the kids are sleeping still, the dogs have been outside, back in, fed, and are napping on the couches. The pool is all taken care of, the floors swept, the dishes done, a few loads of laundry have been put through, and Paul had to go into work for a few things. He's been working from home so much, it's strange to have him gone, and to have true quiet here. The dogs are snoring, the birds are singing, the dryer is humming, and I am sipping my second cup of coffee, a Veranda Light roast from Starbucks, which was marked down in Walmart. It's quite yummy.

Does anyone else sometimes forget that the world is knee-deep in pandemonium? I do. Then I remember the pandemic, and the governor's ever expanding orders and mandates, and blah. Camping this past weekend was a very nice break from the sameness and dire news. I am trying not to read the articles about this person or that person who had a horrific battle with Covid, or the doom and gloom prophecies about the economy. The violence and the statues and monuments being destroyed and defaced make me sick. Then our governor says if you travel here from a state with whatever percentage of positives lately, you will get a huge-0 fine, blah blah blah, but if you riot and smash windows, well, you should think about wearing a mask.

It's the spirit of the times, isn't it? Punish the law abiding citizens for minor offenses, but let the criminals out of jail so they don't get Covid. In New York, the jail reforms are letting so many robbers, assaulters, crooks, dealers, and creepers out of jail...they get an appearance ticket, instead. I do think there needs to be a huge overhaul of the whole prison system, but I'm just working on theory...and that is that people have to have hope in their lives. These long sentences will ruin people, give them short and sweet, with rehabilitation and education in prison, along with having to work while they are there. But prison is big money, the laundry services, uniforms, food services, etc., it's business. It costs the taxpayers money, but it all goes to these big companies (Aramark, for one). I don't know.

I'm glad I'm not in charge of the world. And ssshhh, just for the record, I'm not racist. Now days, you can't even say that, or someone will say, just like a kindergartener, "That means you ARE racist!" Well, nana-nana-boo-boo, I am NOT. YOU ARE, ha. I also won't apolozize for being white. My father was one of 12 kids, grew up in the city, his father was an alcoholic, died when my dad was young. His mom married again, and the step father was very abusive. My dad worked his butt off from the time he was a teenager. He gave most of his money to his mother and to his siblings. He worked very hard in life, never missed a day of work. He was honest to a fault, and wouldn't "take a dime from the government". We qualified for free lunches, ect, when I was growing up, but my father would NEVER allow that. He said you had to work and make your way in life. He worked for the county all his life, sewer plants...or a-hum, water pollution control.

There ARE inequalities, and protesting can bring those to light. There ARE horrible things that happen, like being pulled over just because you are black. I do not disagree with these truths. There are awful and racist people, and there are ignorant and arrogant people, who look down on others for ridiculous reasons. I abhor that.

But, I don't see what's wrong with saying that all lives matter. They do. God created man in his own image. It's written in Psalm 133, "Behold how good and pleasant it is when brothers live together in unity!"

Ah well, I can't change the world. But I can be faithful in my days, in my little corner of it.

Learn Python Programming on Raspberry Pi With These Commands and Data Structures
September 19, 2021

Are Artistic Advanced Degrees Worth the Cost?
September 18, 2021