This was the week that we really needed to give Dean a haircut. His hair was a bit over due for a cut before the stay home stay safe order started. He kept putting it off until it was driving him crazy. Anne shaved the sides and then trimmed the top the next day. He is pleased with it. Thank goodness it all worked out. We are learning to be more and more self sufficient. 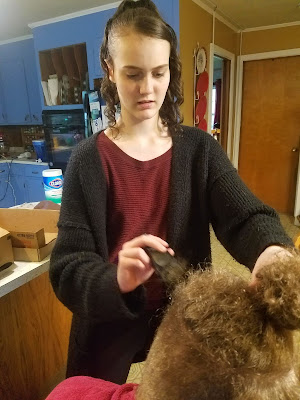 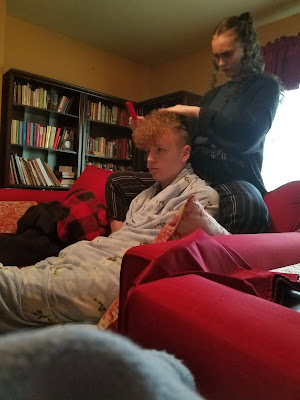 We are also in the process of bringing a tree down that was very sick and half dead. It was right next to the house. David didn't think it was too terribly tall and that we could handle it on our own. He climbed the tree and took down some of the larger branches. We ended up needing to buy a larger chainsaw. We were able to bring it down with everyone helping. Now, we have tons of firewood for our fire pit (which we bought for evening entertainment). It just arrived and we look forward to trying it out in the next few days. 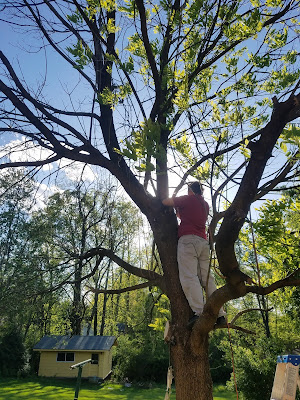 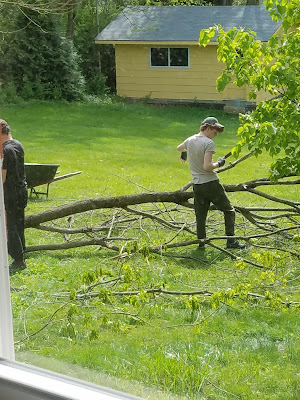 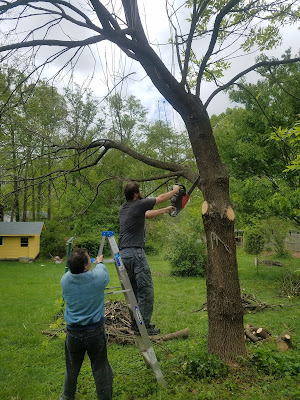 I never got the picture of the tree completely down. They made quick work of it with the new chainsaw.
We are using the backyard for fun too. The guys have been busy playing belegarth. It isn't as much fun with just two, but at least they have each other to spar with each day. 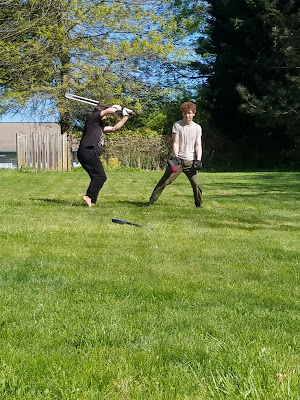 On the educational front. Anne completed Math III this week. She is all done with math for her entire high school career. That feels great. She also completed Earth Science which had dragged on and on for two years. They will both be done with English for the year in a few weeks. We are reading The Hobbit as a family. It is an enjoyable distraction to our daily grind. We are also really enjoying the National park series through National Geographic. Each episode is like a mini vacation. I love to hear the kids talking about all of the animal facts they have learned through the years. They have a strong knowledge base that will serve them well. Dean is on track to be done with all of his subjects and graduate around the first week of June. It is a relief to see the end in sight.
We decided to start doing a few drives a week around our city. We are taking advantage of the lack of traffic and having Anne do most of the driving. She is starting to build her confidence and conquered several new things this week. She drove through a medium size tunnel, dealt with a beautiful, huge bear crossing the road in front of her in the middle of downtown, our narrow downtown streets and several homeless that were walking in the middle of the road. All of these are common occurrences in our city and excellent practice for her.  Although it is somewhat unusual to see a bear actually in the inner city, it certainly isn't unusual to see them in our neighborhood. We did have a bear get caught in the lobby of a hotel on the outskirts of the city last year. You never know where they will pop up.
Stay safe everyone!
Blessings, Dawn