I spent a lot of today weeding on the retaining wall again.  There aren't any before and after pictures, no pictures at all, just the satisfaction of uprooting dandelions and other importunate weeds.  And I yanked out the new growth of the perennial aster or whatever it is.  It travels from the roots and could take over.  I don't want that to happen but I can't get down to the roots.  I thought about using my pitchfork to lever it up but that would mean getting up on top of the retaining wall and I'm just not brave enough to tightrope walk down it, avoid the plants, and not pitch over the edge.

I caught a Hummingbird at the feeder today.  It wasn't perched there, it was hovering, and it looks kind of like a green and tan smudge on the edge of the feeder.  Those things really move.  And they're so small, more like a big bug than a bird.

The first of the Asiatic lily buds opened today.  It will look amazing when all of the buds on top of the stalk are open. 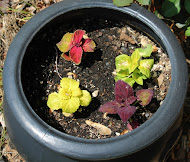 The coleus is settling in nicely.  I found a good variety of leaf colors at Stein's last week so the pots will be prettier this year.  Last year I had to order the plants online from a local nursery and they sent all the same color.  Boring.  I know they're little now but they grow fast.  Soon they'll be tall and beautiful. 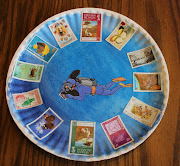 Here's my second paper plate art attempt.  This one is also a collage with the diver in the middle and stamps from islands around the edge.  I've even been diving on some of the islands.  It was fun to remember being there as I glued them in place.

Today's toss was some capris.  I don't know why I thought that I could still wear them; they're really baggy in the behind and they don't look good.  Out!

The prompt today asked you to write a letter to your childhood hero.  I couldn't think of one so I wrote about loving the Jacques Cousteau specials as a tween and kind of hoping he'd get in touch when I got certified to SCUBA dive when I was 39.  It struck me as I wrote that this morning that it was 30 years ago that I learned to dive.  Thirty years!  It doesn't seem like that long but we got certified in 1990 right before my 39th birthday and now I'm 69.  I did the math and almost needed a lie down.