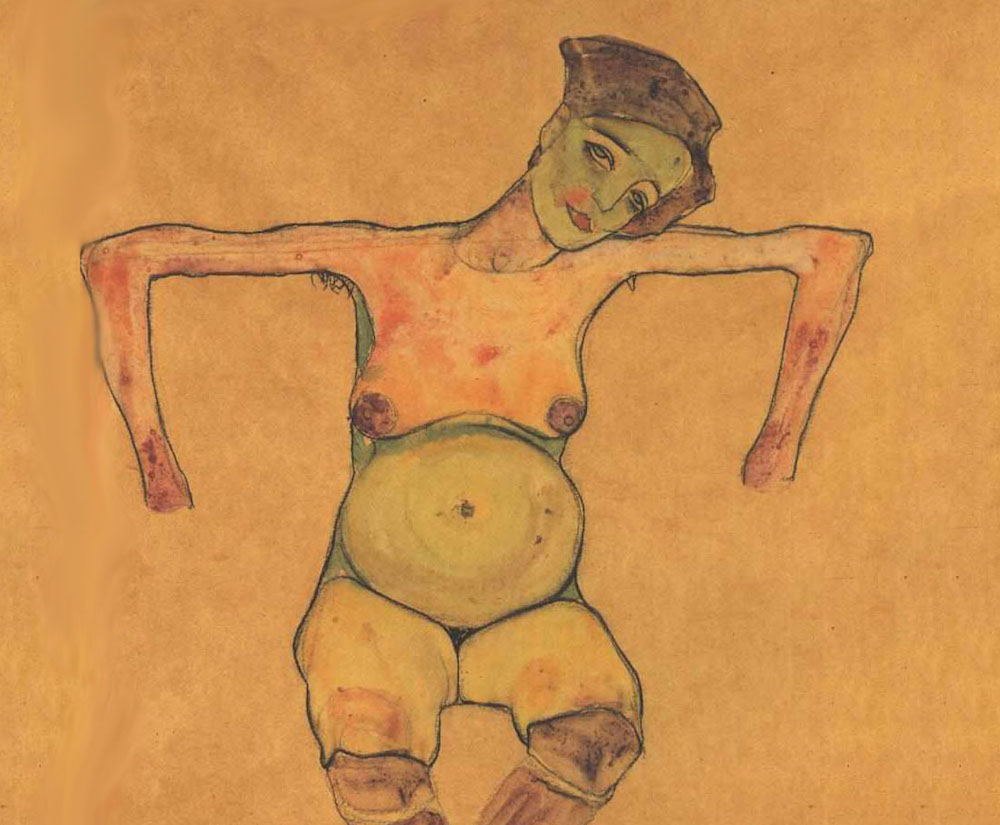 Over these past months, nine, to be exact, I’ve come to think that pleasure and pain always have something to do with things either entering or exiting your body.

Nine months ago I didn’t know that a series of events related to those entrances and exits would converge that November, the same month I turned thirty. My father was diagnosed with colon cancer, Adriana committed suicide by throwing herself from a hotel window, and I was lying in a Spanish National Health Service hospital bed, recovering from major surgery. I returned home, devastated by the news, and physically very weak. I can scarcely remember the days following my operation, two weeks during a particularly cold winter, during which I’d needed J’s help for almost everything. To cut my meat, to brush my teeth, and to clean my incisions.

I’d had some excess mammary glands removed from beneath my armpits and I could barely move my arms. I had two enormous scars from which catheters emerged, draining dark blood. I’d decided to have the glands removed because, aside from being unattractive and annoying, the doctors had assured me that, one day in the remote future when I decided to have children, they would fill with milk and cause me terrible problems. And so I decided that I should amputate what I saw as a deformity, even though my mother, with her magical worldview, insisted on reminding me that in other times, women with supernumerary breasts were burned as witches: for her, my two extra breasts could have held supernatural powers.

The surgery went off without complications but the recovery was turning out to be very difficult. On top of that, the antibiotics they had prescribed to prevent infection seemed to be burning a hole in my stomach.

On J’s birthday, just a few weeks later, I was still feeling so uncomfortable that I decided to stay home. I don’t tend to miss my spouse’s birthdays, so this was unusual. Now, in addition to intense stomach pain, I was nauseated. The next day, when it was time for me to go back to the office, I couldn’t get out of bed. I was too tired. I threw up the entire morning. At noon, J called to see how I was doing, but also to give me some news. “Don’t panic. Okay? The magazine’s closing. It’s done.”

My friend throwing herself into the void.

My mammary glands hacked off.

And now I had lost my job.

J came through the door with a pregnancy test in his hand. We’d been toying with the idea for a few months, in a perpetual coitus interruptus. The true vow, before the “I’ll love and respect you forever” part, is: “I promise not to come inside you.” It’s the first promise that gets broken.

There’s a secret rebellion, maybe a stupid one, but a rebellion nonetheless, against the adult world, or against anything, in never having a condom in the bedside table. I’ve always thought the hottest thing is that familiar scene when the lovers are just about to climax and something interrupts them. Cut short, what could have been a good orgasm becomes the best orgasm. No complete orgasm can exceed a perfectly incomplete one. Pulling out is like retiring at the peak of your career, like writing a masterful volume of short stories and then disappearing, like killing yourself at the age of thirty.

We fell silent for a few seconds looking at the indicator; it’s like looking at the gun you’re going to use to kill yourself. A pregnancy test is always an intimidating presence, especially if you’re freshly unemployed.

I had to pee in a vial, sprinkle a few drops on that white thingy while J read the instructions and finally figured out that two stripes means yes and one stripe means no. According to the box, a home pregnancy test is 99 percent accurate if the result is positive, while, if it’s negative, there’s a greater margin of error and the test should be repeated in a few days. I don’t know how many times I’d taken that test in my life, the result almost always negative.

Women play all the time with the great power that has been conferred upon us: it’s fun to think about reproducing. Or not reproducing. Or walking around in a sweet little dress with a round belly underneath that will turn into a baby to cuddle and spoil. When you’re fifteen, the idea is fascinating, it attracts you like a piece of chocolate cake. When you’re thirty, the possibility attracts you like an abyss.

On the leaflet it also said that pregnancy tests measure the presence in urine of a hormone called Human Chorionic Gonadotropin. This hormone, let’s call it by its first name, Gona, appears in the blood approximately six days after conception, when the fertilized egg implants in the uterus. In the five minutes it took the gadget to decide what would become of my life, I scrolled in slow motion through every time I’d made love during the past month, trying to identify the fatal day. Finally, the two red bars quickly appeared, like the words “The End” in a movie.

“That’s the last time we ever work together at the same place,” I said to J.

Because now we could actually say that an entire family was about to be out on its ass, and facing the coldest Christmas in years, according to the weatherman. Although the weatherman is usually wrong.

Two gametes form a zygote. I like the way the fertilization formula sounds. It’s pure math. The most powerful feelings upon discovering that you’re pregnant have to do with the unreality of the math. They’ve told you it’s there, that it will multiply in size, that now it’s the shape of a peanut, and then a cherry, and so on, but you don’t see it, you don’t feel it. I could have opted to pay two hundred euros for one of those ultramodern sonogram machines that show you what’s inside, but for now, I would limit myself to consulting direct testimonies. To one woman, a four-week-old embryo looked like a shrimp, to another, it was a pea, to another, a little fish, and to another, a spot in the distance. Why should maternity draw us immediately into lyrical digressions and take us to the edge of inanity? Could the mere possibility of having a baby with the face of a frightened monkey in our arms be enough to trigger that unbridled tenderness? I decided to write my own zoological turn of phrase: “At four weeks, a child is like the ghost of a seahorse.”

The truth is you still can’t see anything. Just the premature gestational sac, less than ten centimeters in diameter, the bag inside which the fetus will grow. What an awful word fetus is. It’s so ugly. An embryo looks like something that could only be aquatic. It doesn’t look human. It has a tail. It’s four millimeters long and its eyes are like the pair of black dots that you sometimes find in a raw egg before putting it in the skillet.

In my old encyclopedia of the human body, I read that in an embryo you can already make out the spinal column, the lungs and the rest of the organs, all on a minuscule scale. However, a four-week-old baby is not a human being, it’s hundreds of species all at once. Up until recent decades, it was thought that the human baby passed through every stage of evolution inside the mother’s womb, that it had the gills of a fish and the tail of a monkey. It seemed plausible. Then it was proven that those weren’t really gills and that wasn’t really a tail, but, in seeing the images of a fetus’s evolution, one might well conclude that pregnancy is the trailer for the movie of life. Would you like to see the whole film?

Books don’t prepare you for what’s coming. Manuals for pregnant women must have been written by mothers completely drugged by love for their children, without the slightest pinch of critical distance. They all say: you’ll feel slight nausea in the morning, your breasts will become full and tender, you’ll feel tired and the frequent need to urinate. Ah, and of course: “don’t smoke, don’t drink coffee or Coca-Cola, don’t take drugs, avoid X-rays.” How the hell am I supposed to bear all this stress without even a can of Coca-Cola? How is it that no one has yet created a designer drug for pregnant women? Prenatal ecstasy, LSD for expectant mothers, something like that.

To start with, it’s not just nausea; the fundamental malaise that seizes you when you wake up in the morning is like waking up with a hangover and a guilty conscience all at the same time, like waking up after a loved one’s funeral or seeing dawn break on the day after losing the love of your life. The nausea would attack me in the most inopportune places and times. I started to think that it revealed a certain psychology in my relationship with things. For example, I always got nauseated when I had to do something that I didn’t want to do, like go out to buy bread very early in the morning in the middle of winter. It also appeared when I was with a certain, very beloved friend. Every time I saw her I would have to run to the bathroom.

Don’t even get me started on my breasts; they hurt at the slightest touch. They weren’t the only sensitive things. It was all of me. I never imagined that I could cry watching one of those horrendous talk shows hosted by some snake in the grass who interviews children searching for their mothers and neighbors who hate each other; but cry I did, oceans of tears, especially at stories like: “Her husband cheated on her with the ninety-nine-cent-store clerk … Let’s bring out the huuuuusband!” I, a person with advanced degrees, raised in a home where we listened to Silvio Rodríguez and Quilapayún, would find myself curled in a fetal position under a blanket, the remote control my only umbilical cord to the world. And someone had pressed the slow-motion button.

I spent long hours watching trash TV, sleeping and dreaming that I was giving birth to a monkey.

—Translated from the Spanish by Jessica Powell

Gabriela Wiener (Lima, 1975) is the acclaimed author of six collections of crónicas, including Sexographies (2018), her first to be translated into English. She writes regularly for the newspapers El País (Spain), La República (Peru), and others in the U.S. and Europe. In Madrid, where she lives, she worked as the editor of the Spanish edition of Marie Claire.

Jessica Powell has published dozens of translations of literary works by a wide variety of Latin American writers, including Silvina Ocampo, Pablo Neruda, and Antonio Benítez Rojo. She is the recipient of a National Endowment for the Arts Translation Fellowship and has been a finalist for the Best Translated Book Award and long-listed for the National Translation Award. She lives in Santa Barbara.

Excerpted from Nine Moons, by Gabriela Wiener, translated from the Spanish by Jessica Powell, published this week by Restless Books. © Restless Books 2020.