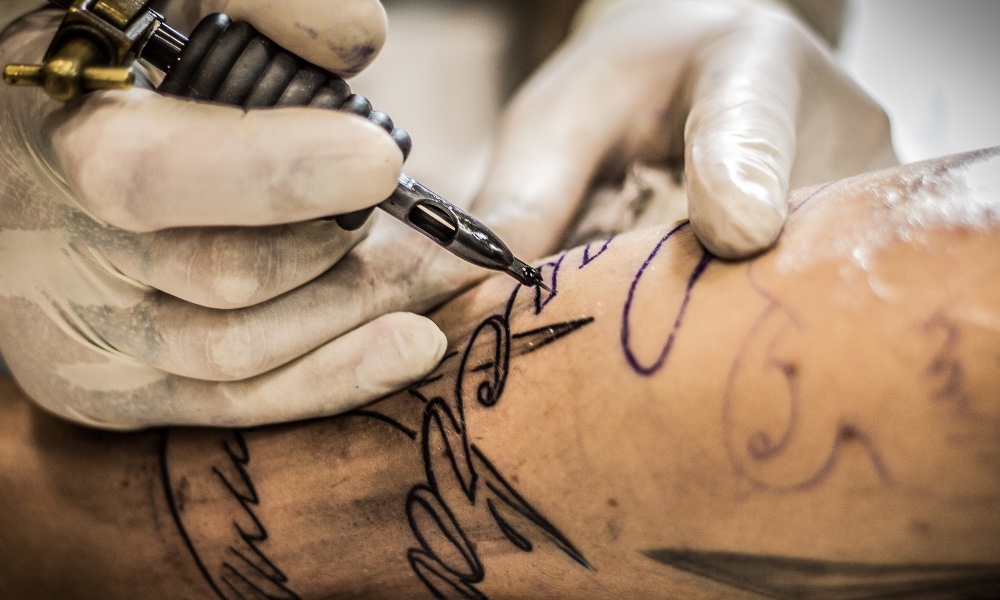 There’s a meme (or three) going around social media about tattooing your spells onto your body as a wizard so you “can never lose your spell book.” I actually like this idea. I don’t think I’d do it as a player, but as a GM, I’m on board. However, there are some limitations. Let’s dive into the idea deeper!

Quick Author Note: I’m using humans in my math and examples below, so some adjustments might need to be made for larger (half orc) or smaller (halfling) fantasy species. I’ll let you house rule things based on what I have to say here.

Pages In A Book

The standard spell consumes one page of your spellbook per level of the spell.

In past (pre-fifth edition) the standard spell consumed one page of your spellbook per level of the spell. This meant a first-level spell was a measly one page, and those super powerful ninth-level spells consumed nine pages. The standard size of spellbooks has varied over the ages between 50 and 100 pages, so the really high level wizards would often have multiple volumes to contain their entire selection. This gave rise to the “traveling spellbook” which only contained the wizard’s typical spell selections with a few extras thrown in if they would fit.

While fifth edition doesn’t specify (that I could find in the rules) how many pages a spell takes up, I’m sticking with the ruling of previous editions for this mathematical exercise. I also like the rule, so it works for my campaign.

Pages On The Skin

Since I’m a nice GM, I err on the side of the players.

I did a quick bit of research and discovered that it takes somewhere between 36 and 53 skins from sheep calves to produce a single volume of the Rhymed Bible (source: https://www.kbr.be/en/sheep/). This particular book was 436 pages long. It was hard to pin down the “average weight” of the sheep calves used for books way back then, but I’m going out on a limb to say that a full-grown human is roughly twice as large as a sheep calf.

Going back to the bible, two pages combine into a “folio.” According to the link I used above, a single sheep can produce 4 to 6 folios. Going with “humans are twice the size of a calf” then human skin can be used for 8 to 12 folios. Since I’m a nice GM, I err on the side of the players in these situations. So that’s 12 folios worth of skin. In other words, 24 pages.

The number of “pages” you can study on your own body is about 16 levels worth of spells.

But wait! Wizards have to read and study those pages each morning to refresh or change your spells. I don’t know about you, but I can’t see my face or back or backside without the use of a mirror. There are also some more sensitive areas where I would not want to have a tattoo. This reduces the surface area that can be legitimately used as “pages” in the tattooed spellbook.

Yes, mirrors and mirrored text can come into play, but good luck studying your back with a steel mirror while adventuring and making sense of everything inscribed on your back. The face is a different matter, but I’d extend the time necessary for the character to study any spells inscribed on the face.

Given this limitation, I’d say this cuts down the number of “pages” you can see/study on your own body to about 16 levels worth of spells. That’s really impressive, actually. Low-level mages could easily carry their entire portfolio of spells on their body without fearing the loss or destruction of their precious spellbook. Once higher levels are reached, then the space will become a serious consideration.

Of course, if your adventuring group is especially generous with their skin (and appearance), I would allow a wizard to have their spells tattooed on a party member. This can expand the number of “pages” available, but good luck allowing the barbarian to let magical ink get hammered into his skin with a needle. Also, it’s going to be really ookie and inconvenient to read the barbarian’s back if he dies in a horrible battle.

The character is going to have to cough up 500 GP per level of the spell.

The going rate for scribing a new spell into a spellbook is 50 GP per level of the spell. This is because the ink, materials, and quill are rare and expensive. However, we’re talking about tattoos here, not simple ink on parchment.

A wizard wanting to go down this path is going to have to find a wizard capable of scribing (casting) the spell, has the right equipment to tattoo, has the necessary special inks, and that has the time to carefully inscribe the spell into the wizard’s skin.

Given the limitations of everything above, I can see a tattooed wizard being especially rare, but I’d still allow it. However, the character is going to have to cough up 500 GP per level of the spell to get the tattoo put on their body. I might even go so far as to requiring a “favor” to the wizardly tattoo artist for the rare or super high level spells. This is not to mention that the wizardly tattoo artist is going to be an extreme rarity (unless it’s a strong aspect of a culture of wizards, which I think might be a cool aspect of a society.)

The wizard must make a DC 13 constitution saving throw for any damage over 10 points.

As we all know, adventuring is not a peaceful undertaking. Honestly, it’s downright dangerous and can be deadly. This means the wizard is going to be, at some point, in harm’s way. Sword slashes, arrow piercings, acid traps, magical fire, dragon breath, and so on can easily damage the wizard. This damage, of course, has to go through the skin to get to the vital bits. This means the tattoos are at risk.

However, I’m not one to take away a very cool thing from the player capriciously. If magical healing is applied, I’d allow the tattoos to remain intact and legible. However, if the damage is healed naturally, I’d probably have the wizard make a DC 13 constitution saving throw for any damage over 10 points or scar tissue will mar the magical tattooed inscription. This will render the spell illegible which will prevent the wizard from studying that spell. I think a random die roll to determine which spell they lose a page from is appropriate.

Of course, I’d also allow fresh tattoos to be placed over the scar tissue to “repair the damaged page” at a cost of 250 GP per page requiring repairs. I think that’s more than fair.

I’ve seen all sorts of chatter on social media. There are folks that think the idea is stupid. There are GMs out there that wouldn’t allow it at all. There are also people on the other end of the spectrum that thinks this is so cool, they might encourage their wizard PC to do it. What are your thoughts on this?