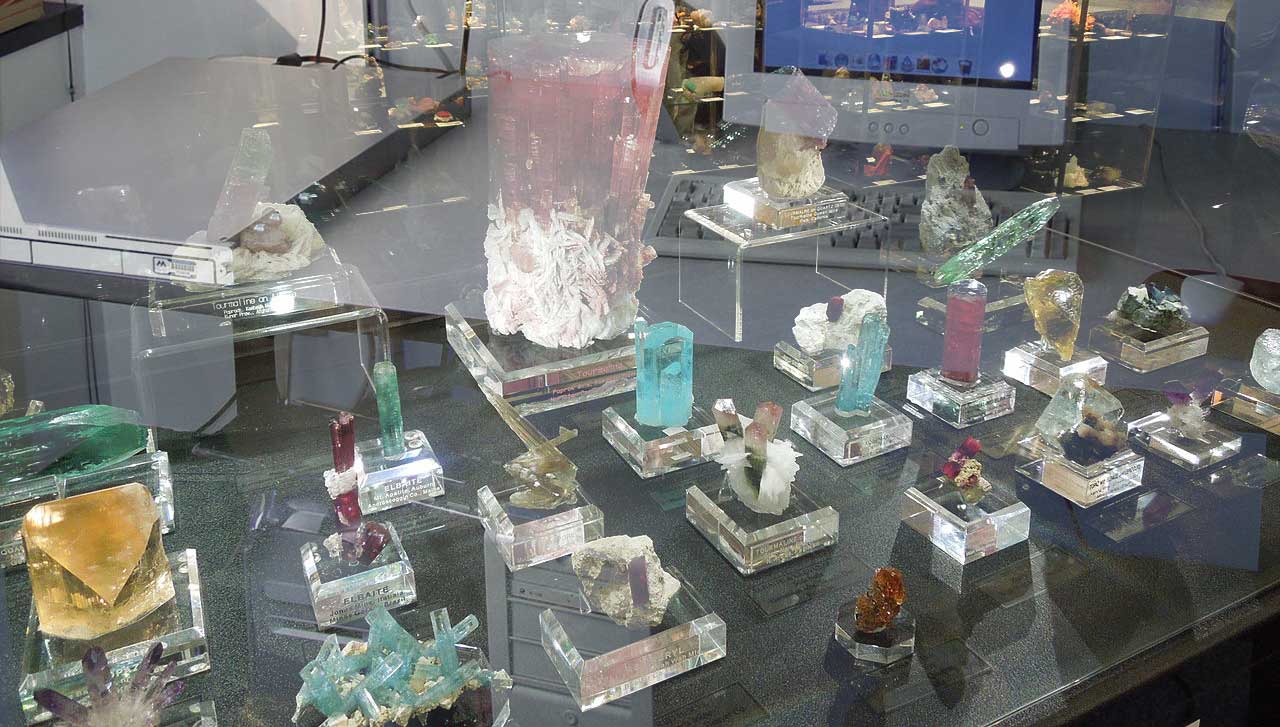 My memory may be operating at guess level here.

Back in 1992, my first year as an instructional technologist* at the Maricopa Community Colleges, for exact reasons I forget, I was giving what now I know are subdomain names for all of the computers in our office.

The how/why goes further back than my era, when a system-wide effort happened (late 1980s?) to connect every office, room, class space across the ten college district (spanning the large spread of Phoenix) to a common network. All the wiring was standardized, with colleges connected to each other then by high speed microwave network.

What it meant when I walked into my new office in 1992, that there were communication jacks for phone and … data. I believe there were 4 jacks, one for phone. The others could be activated for data. Written on the jacks were it’s assigned IP address (this was before networks did dynamic allocation of addresses).

Again I forget why, perhaps it was something about sharing files between our office computers (mostly but not all Apple) that there was a reason I assigned named addresses for everyone’s machine that mapped to their address their machine was plugged into.

As the office “tech” person, I just submitted a request to our IT department to map the name to an IP addressed. But how to pick names? I resorted to the field I had eft to take on this job; I had been a graduate student in Geology at Arizona State University.

I decided to use mineral names.

I do remember the ones in my own office (I had been set up in a space with like 3 internet ports. My high end (then) machine, a Mac Quadra 900, I named topaz.mcli.dist.maricopa.edu. Topaz is just below diamond and corundum on Mohs hardness scale (checks in at 8) and also makes for gem quality crystals. I had in my office a small vial of ones I had collected a few years ago at Topaz Mountain, Utah.

As my own inside joke, the Windows PC in my office was dubbed pyrite.mcli.dist.maricopa.edu – go figure it out.

Naming machines after minerals is not all that significant, but it did come into play when I found out that these addresses could, if settings were turned on, make them accessible as internet addressable machines.

It seems so quaint, but more or less I could plug a computer into our network, make a request to IT, and have that computer be an internet server. See how innocent the early 1990s were? I can imagine network administrators now shuddering at the thought.

Everyone in our office worked on Apple computers. Those would be running Mac OS Classic System 7. Software was installed from floppy disks. Brontosauruses roamed the field between the office and the freeway (just kidding; but it was that long ago).

When I started, there was a mac set up running as shared server for a ESL project that was being done in HyperCard. I am guessing it was done for the group of ASU instructional designers in the office collaborating on it as well as some of the project leads at Glendale Community College. It was made available on the network via AppleShare.

Because Maricopa had this common network, thus available to any Apple computer, I saw some opportunity to do even more sharing of resources, materials, etc, as a service since we supported faculty and projects across the system. I found an article I wrote for our October 1992 newsletter, The Labyrinth. You will find an image of the kinds of network connection used (an adapter from the Mac’s printer port).

The current items are listed in detail in a plain text document. To date, this includes:

* HyperCard stacks and development tools
* a screen-capture utility
* QuickTime movies
* a full-featured desktop calculator
* a teacher’s grading program
* the Internet resources mentioned in this issue
* and much more.

In the future, we will be posting an expanded, all electronic version of the Labyrinth. Explore the many resources available just beyond your desk!

In that first year I was scouring apps, programs, resources likely via public ftp sites (they were a big thing once) and trying to organize them as a means to share. It was organizing stuff in a directory of file folders, made public. “This makes copying of files, especially large ones, much easier than using floppy disks. At MCLI, we have our project collaborators post their files on our server (this was how the other authors in this issue submitted their articles). We can give them quick turn-around time while avoiding the travel-time of driving to the District office.” Woosh, there goes a pterodactyl flying overhead!

Here is what it took to connect in those days (not long after the invention of the wheel).

As archaic as this is, just know it set the stage- an office computer was easily turned into a public file server for anyone on the Maricopa network (and you will see there was a “private” server mount for our office that required a login).

A problem in this setup might be glaring at you. Our office was Apple-Centric, but the entire Maricopa district was mixed Apple OS and PC (aka Microsoft, there were people then not even up to Windows); and at each college, it was a mixed platform as well.

The article above mentioned that PC users could connect to the Apple file server with a special hardware card, but that was not widely available.

The solution (and name) came from the University of Minnesota. It was launched in 1991, just a year before I started at Maricopa. Gopher was in many ways something forgotten that laid the groundwork for the web (read more about the days when Gopher Ruled the Internet).

It might seem archaic now compare to the web we know and take for granted, but Gopher took what was an activity of logging in to different internet servers and services (e.g. ftp) and bridging them through one interface.

It was a menu driven internet experience, folders and files. A Gopher server offered a first entry as a list of options to “go” into. You might click a items number from a command line interface, or click in a visual interface. But each item could be:

You would then travel and explore by going down gopher holes! Sometimes backing out.

But Gopher was and still is, an internet protocol. There are some folks still at keeping them going, and there are places to explore the experience via a web browser as well as the the aptly named Overbite Project.

I might have heard about Gopher on a listserv or seen mention of it on the ftp sites I was exploring. The first stage was spent exploring, but then when I came across something that would let me turn an office computer into a server I could manage, the light bulbs went off.

This solved the platform issue of sharing resources via AppleShare, since gopher servers could be accessed via both Macs and PCs. And at the time, all Maricopa Employees actually did email on a VAX based system – more or less command line to launch something called All in One, of the days when we talked about “sending an A1”.

I do not know what I used, but I turned an office Mac II into an MCLI gopher server. To do this, I had to give it a subdomain name so others could find it. A logical name might have been gopher.mcli.dist.maricopa.edu but for some reason I stuck with geology naming. Maybe to differentiate from office machines named after minerals, I went to using Geological formations from the Grand Canyon.

Thus, the gopher server I set up was available via tapeats.mcli.dist.maricopa.edu, named for the Tapeats Sandstone, a key layer as it is in the first in the flat lying sedimentary formations that site above the older, contorted metamorphic basement, a great expanse of time marked by the Grand Unconformity. You see, the Tapeats marked a significant change in the earth record.

I found in my old files a terribly low quality image of the server, I can tell it is sitting on the edge of my desk in front of the windows (outside, a stegosaurus stares off into the distance).

This was likely taken with the first generation digital camera, an Apple QuickTake.

I decided to make the Gopher Server pretty much a mirror of what I had set up on the Apple Server. I was writing about Gopher in February 1993, again in our MCLI newsletter (I should we printed these and sent them out to all employees via interoffice mail).

These images show the structure from a VAX text only interface

I don’t have the contenta available, this would have mapped to the folder file structure on that Mac II, with some special syntax on a text file name likely used to indicate a link to Gopher Server.

I imagine “Into the Internet” had external gopher holes as well as downloads of Gopher, WAIS, FTP client software, maybe a copy of The Whole Internet Catalog?. The “Labyrinth-Forum” would have maybe text or maybe PDF. We supported a district wide math project under “Maricopa Math Resources” “MCLI Resources” would include handouts and other projects developed by our office. “Ocotillo” was the system wide faculty-led technology planning and exploration program (this will be a whole raft of future posts). I tried to organize interesting software for both Apple and “IBM” (aka PC) computers.

But there I was maybe in late 1992 with my first public internet server. I wrote about in in February 1993 was what I saw as the place worth using to explore online spaces. The very last sentence I wrote then indicates I was aware of the web, actually then we spoke if it in the full World Wide Web or WWW nomenclature.

This suggests in early 1993 I had read of the WWW and likely had tried a text based interface, but I did not get on board until a wonderfully fateful exchange happened in October.

Given the dire now I’ve been thinking a lot of my early web years, not really as to get all nostalgic, but just charting how it all got started for me. I almost accidentally fell into the early web in 1993, and that has enabled just about everything I did since. But that was enabled by the history and culture of the visionary leaders and faculty who preceded me at the Maricopa Community Colleges. I have no grand plans here of a b*** just wanting to write a series of connected posts, though not necessarily n chronological order. The working blog tag is thewebandme (yes it has syntax issues) and I may be back tagging related posts.

*actually my first title was “Programmer Analyst/Instructional Systems” That has no pizazz.

Featured Image: A Photoshop combination of MCLI Server “Farm” flickr photo by cogdogblog shared into the public domain using Creative Commons Public Domain Dedication (CC0) (and the flickr notes still work!) superimposed on 2012 Tucson Gem & Mineral Show 46.JPG Wikimedia Commons photo by Simeon87 shared under a Creative Commons CC BY-SA license. The connection is I attended a few times the Tucson mineral show while a Geology graduate student, prior to my jump into education and technology. Oh, it’s all connected if you go down enough gopher holes.