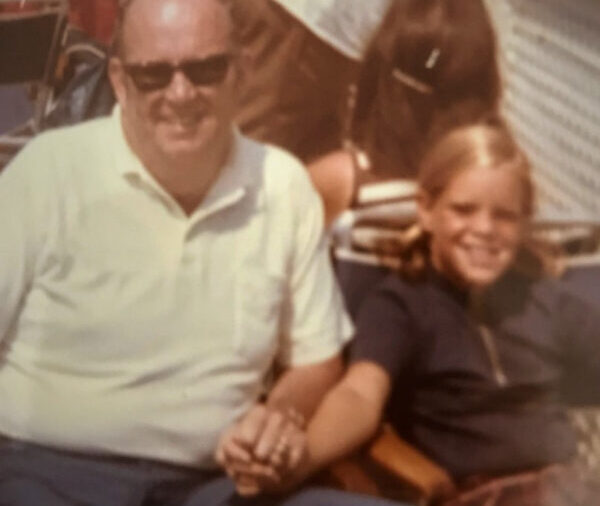 I loved the feel of my hand in his. It was strong, but not tight; soft, but sure. Instead of a wedding ring, he wore a magnificent gold ring with a garnet stone on his left hand. Though the date had worn off long ago, it claimed him as a Catholic University Cardinal, circa 1940-something. It sits in the drawer of my bedside table, and sometimes I slip it on my finger. My dad would be 95-years-old. He’s been gone 12 years.

Propelled by a clever commercial—Lederhosen or Kilt?—I spat in a tube on a snowy February day and sent my saliva sample through the mail. Six weeks later, an early morning text announced that my results were in.  I hit the DNA button on Ancestry.com. Within seconds, I found out that I am barely Irish, though I was steeped in its lore. I was not surprised to see that Swedish and British blood runs thickly through my veins. As an adopted child from Saint Paul, Minnesota, the results did not shock me, yet it was fascinating to see Scotland, Wales, Germany, and Russia. I was the very best kind of rescue, a convoluted mutt.

It took only a few hours for the Ancestry.com DNA results to morph into a Pandora’s box for which I had not bargained. Biological connections outside my two children overwhelmed me, and via Ancestry email, half-sisters, cousins, and a sister-in-law from my biological father’s family raced to contact me. Within a week, I would connect with my birth mother’s family, their shared surnames shouting at me from the computer screen. I unearthed seven half-siblings in total, and pictures of my birth parents flooded my inbox.

Within a month, I wanted to slam Pandora’s Box shut and seal it with cement.

The cacophonous details of that story will wait for another day. This is a story about my dad.

I use the word dad so that it is not confused with father. While a father contributes the necessary deposit to begin life, a dad brings you to its fullness.

I saw the revival of To Kill A Mockingbird on Broadway, and it was riveting. That night, as I drifted toward sleep, my mind swirled with thoughts of Atticus Finch. When I woke the following snowy morning, I felt wrapped in a blanket of peace. I had dreamt of my dad.

I rarely dream of loved ones long gone. I have no recollection of dad ever visiting me in the deepness of sleep. If I do dream in the subconscious of night, the memory of it generally flies from me. But, that morning, thoughts of one of the great dads of literature conspired to deliver the palpable warmth of my own.

I remember no action in that dream, just my dad’s animated face and easy smile. I felt happy when I woke.

At the time, I was in occasional touch with Mary, a half-sister discovered via Ancestry.com. We shared a biological father who was married to her mother for a time. I leared their relationship had been complicated until his death. As I wrapped my palms around a warm mug of coffee, my phone buzzed. It was a text from Mary, Good morning. I was going through some boxes and thought you like to see this picture of our father. 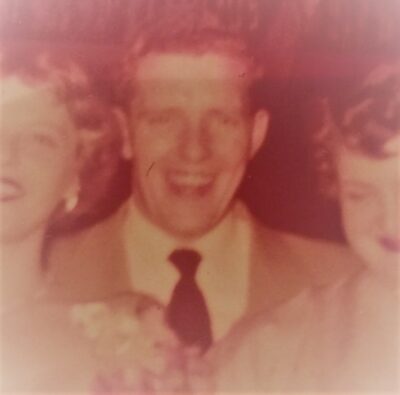 And there he was, chasing away the dream of my dad.

My spine stiffened, and my soul went cold. I wanted to linger in my dad’s other-wordly embrace. Instead, the face of my father, whose features I see in the mirror each morning, interrupted my peace. I had seen pictures of him before, but this one was lively. I share his eyes, thick wavy hair, and broad smile and wanted none of it. My barely familiar half-sister could not know that Atticus Finch had delivered me a dream of my dad. She could not know that a picture of our father would only make me weep and miss my dad all the more.

I remained unsettled throughout the morning, agitated and tearful. Reconstituted grief over the loss of my father stormed back. It felt like a violation.

Around noon, my phone buzzed again. It was a younger cousin with whom I grew up. She texted only this, May 9, 1966, and attached a picture. 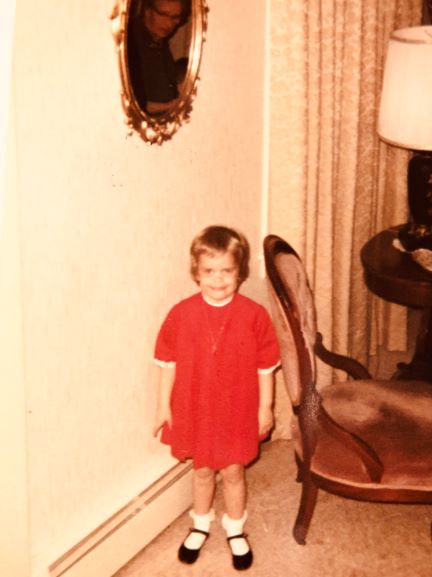 On that cold February day, my cousin could not know that the picture she sent would be a salve on an open wound. She could not know that while I chuckled at my four-year-old self, the gift of the photo appeared on its top edges, in a reflection of a mirror. My dear cousin likely missed it herself, but it leaped at me — my dad watching over me with the same pride and protection he sprinkled upon me until the day he died.

My dad was a rascally Irishman who regularly burst through the door at the end of his workday, Hey, El, How was school? Did you kiss any boys? At Sunday mass at Saint Margaret’s Church, he’d coax giggles from me, tickling my knee as mom glared at us with exasperated disapproval. When a “D” appeared on my report card, announcing my absolute ineptitude in Algebra, dad popped into my bedroom to share his Catholic University report card. He pointed to the same letter next to his college math class, “It’ll be fine, El. We can’t be good at everything!”

Though not an athlete, dad reveled in my athletic success. Tennis balls eventually replaced softballs and basketballs, but his interest in my competitive staying power never waned. In the final year of his life, two years after mom passed away, he moved from Providence to be near me in Connecticut. By then, his aging body demanded the help of a walker, and he was wobbly and weary most of the time. One weekend he begged to come to watch me play tennis. It was a friendly doubles game, and I was an aging 47-year-old athlete, but when I spied him, leaning on his walker, peering at our court with an enormous smile, I may as well have been 16-years-old. He was my greatest cheerleader.

When I was a child, my dad introduced me to adults like this, Have you met Ellen. I had to go all the way to Saint Paul, Minnesota to get her. How lucky am I? My dad treated my adoption like a stroke of unexpected fortune, a celebration he loved to share.

I met a day that conspired to muddle me by slipping on his precious, gold, Catholic University ring and recalled this truth—the dad who raises you is all that matters. The rest is just biology.

The post Me and My Dad appeared first on The Good Men Project.