Donnette Leftord is facing some impossible math. A mother of three and the owner of a small housekeeping business, Leftord usually earns $408 a week. Her company has been closed during the coronavirus pandemic. The monthly rent on her apartment in Flatbush, Brooklyn, is $1,700. And her family has other expenses to pay too. “Medication is important to me. Food is important. Rent is important,” Leftord said. “I just do the math. There is no way I can pay rent.”

On May Day, she and millions of other Americans failed to make payments to their landlord in full and on time. One-third of renters failed to do so in April, when the economy was stronger. Most withheld rent out of simple necessity, unable to come up with the cash. But some did so on political principle.

In the past month, organizers in New York, Philadelphia, the Bay Area, and elsewhere have coordinated what is likely the biggest rent strike in American history: Nearly 200,000 tenants have stopped paying rent and are voicing their demands for rent forgiveness to landlords, politicians, and the media. It’s not just that they can’t pay. It’s that they won’t. The actions are meant to spur state and federal politicians to halt evictions and provide relief to renters. “We’ve been saying in the housing-justice movement, ‘We’re just one paycheck away from eviction,’” said Cea Weaver, a strike organizer and housing activist. “It’s true. And now everybody knows that it’s true.”

The reality of this unfurling rental crisis is not lost on politicians. Democratic Representative Ilhan Omar of Minnesota has put forward a bill that would cancel rent and mortgage payments for the duration of the crisis; the congressional rescue bill suspended evictions for federally backed rentals, though some building owners are not following the law; a number of cities and states have also imposed eviction moratoriums. And thousands of private businesses—landlords, real-estate investors, banks, housing trusts—are working out provisions to cut or delay tenants’ and mortgage-holders’ bills.

Canceling rent, radical though it sounds, would help low-income families keep their head above water, stabilize the housing market, and reduce the depth of the recession. But in some ways, even that radical-sounding demand is too small. This is not just a sudden housing crisis. This is a sudden housing crisis that has collided with a slow-boiling, structural housing crisis. Even before the viral recession hit, high housing costs were leading to homelessness, long commute times, food insecurity, and diminished household savings. The rents were too high. They are too high. And now the government must do something about it.

Just a few months ago, the American economy was arguably as good as it had been since the 1990s or even the 1960s. The unemployment rate was at a historic low. Growth was good, if not great. Wages were rising across the board. Even so, an affordability crisis was gripping tens of millions of low-income, middle-income, and even high-income families: The cities fueling America’s innovation and growth had severe housing shortages, caused in part by decades of underbuilding and overly restrictive zoning policies. That led to soaring home prices, benefiting wealthy homeowners but shutting millions of younger Americans out of the housing market and driving up rents.

As of 2018, 44 percent of renters in New York paid more than 30 percent of their income in rent; 22 percent paid more than 50 percent. But the problem extended far beyond superstar cities on the coasts. Suburbs, rural areas, cities in the Midwest and the South—they all had their own affordability crises, driven by a combination of wage stagnation and increasing housing costs. Across the country, a larger share of low-to-middle-income families were rent-burdened in 2018 than in 2011, with 21 million households spending 30 percent or more of their earnings on rent and utilities.

Even during the good times, two in five Americans and three in five renters could not have come up with $400 in an emergency, Federal Reserve data show. How can such families pay their landlords in the lightning-strike cataclysm of the pandemic? “The rents have increased so much with gentrification,” Lena Melendez, a rent striker based in Washington Heights, in New York City, told me. “Just one month’s rent can be too much, because the market rate is unsustainable. Even with unemployment, the $600, and the stimulus checks, it won’t be enough,” she added, referring to federal relief measures.

[George Packer: We are living in a failed state]

Researchers have scant data to indicate just how many people won’t have “enough.” “One of the frustrating things for studying housing markets is that we don’t get nearly as much real-time data as we do on labor markets,” Jenny Schuetz, a housing expert at the Brookings Institution’s Metropolitan Policy Program, told me. “We get weekly unemployment-insurance claims. But for official data on housing markets, we get things like the number of new building permits issued or changes in housing prices, which doesn’t actually tell you much about the financial stresses on individual households.”

But the little hard information we do have suggests that huge shares of American renters are now unable to make payments in full. A new study by the Terner Center for Housing Innovation at UC Berkeley estimates that roughly 16.5 million renter households have lost income because of the pandemic, and more than 7 million of those households were struggling to make rent before these losses. The sum of rent payments likely to go missing is in the billions of dollars a month, says Ben Metcalf, the managing director of the Terner Center. “It’s a big honking number.”

The federal government had little ready-made infrastructure to fight this catastrophe. Nor did it have ready-made infrastructure to fight the problems renters were facing before the coronavirus pandemic hit. The country’s housing policy is heavily tilted toward high-income homeowners, with the government spending roughly three times as much each year on the mortgage-interest deduction as it spends on housing vouchers. For decades, Washington has operated on the principle that “the way you meet people’s need for stable housing is to make homeownership accessible,” J. W. Mason, an economist at John Jay College at the City University of New York, told me. “We don’t really have a set of policies to give renters the protections, the stability, and the ability to make investments in their homes that we have for homeowners.”

Now officials are scrambling to come up with policies to give renters some stability through the crisis. The federal government has sent $1,200 checks to most American adults, and expanded the unemployment-insurance program, including a $600 weekly bump in payments. Housing experts say that stimulus money will ultimately help keep millions of renters in their homes. These policies, along with eviction moratoriums, are providing some security to stressed households. But millions of families are accruing back rent. When it comes due, there will be chaos: landlords and tenants and the courts negotiating, cajoling, suing, evicting.

Already, many renters are in tense back-and-forths with their landlords over rent forgiveness. Peggy Perkins, who lives in a low-income housing development in Hempstead, New York, told me that she had asked a building manager about rent cancellation. “He said it didn't matter, rent still had to be paid,” she said, adding that he’d posted a notice warning tenants about “misinformation circulating in the media” and advising them to pay. On organizing calls, Perkins said, tenants have reported their building managers withholding maintenance, threatening eviction, and lying about the legal reprieves provided by the state and federal government.

[Read: I have seen the future—and it’s not the life we knew]

The miserable overall state of the economy, in some perverse sense, might act in tenants’ favor. “Most landlords are not in business to be evil,” Schuetz said. “They’re not looking to kick people out unless there’s a reason, and in particular, at a time period when it’s going to be very hard to rent the apartment to somebody else—the other potential tenants are also unemployed and have no money, and it’s hard to show the apartment, and you don’t necessarily want to send staff to clean it and paint it and turn it over.”

Nevertheless, tenants will face hefty bills, ruined credit, food insecurity, and the prospect of homelessness. Landlords, for their part, are vulnerable too: “Most of the rental apartment buildings in the U.S. are owned by mom-and-pops,” Metcalf told me. “They’re serving a segment of the population that’s relatively low-income, and it would not be good to see these mom-and pop owners forced out of business, having to liquidate their properties. You could then see even more dislocation and consolidation, even more of a chilling impact on future supply.” Plus, many landlords hold mortgages themselves. The stability of the broader real-estate market is at stake.

The rent strike—which shifts losses from renters to landlords—will foment instability. But it is not an end in itself; it is aimed at forcing state and federal action. In New York, the hotbed of the rent strike, organizers are demanding that Governor Andrew Cuomo cancel rent for at least four months, freeze rents at current levels, house the unhoused, and increase investments in public housing. Omar’s bill would cancel rent and mortgage payments, cover landlords’ losses, and finance the purchase of rental properties to be used for affordable housing.

Even these measures fall short. The country needs a holistic, broad policy to aid and support renters, just as it has a holistic, broad policy to aid homeowners. Most rent-burdened low-income households do not receive federal rental assistance. Making subsidies an entitlement, received automatically if families meet certain income criteria, would help solve the affordability crisis. Encouraging construction in dense, wealthy cities would ease the housing shortage at the heart of the problem. Eroding the mortgage-interest deduction, investing in public housing, and committing the federal government to ending homelessness are crucial policies too. These changes would prevent rent strikes from being necessary in the future, and help ensure that all Americans have an affordable place to call home. 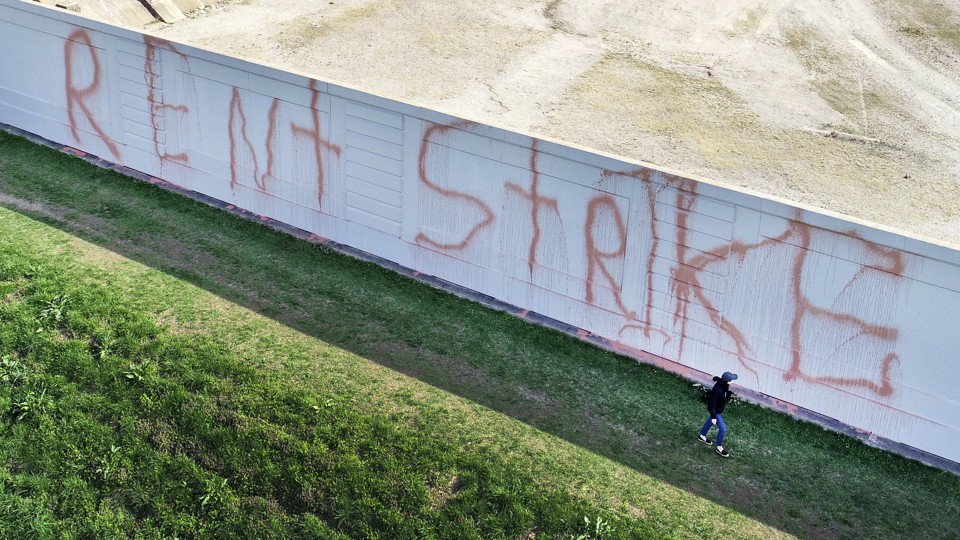