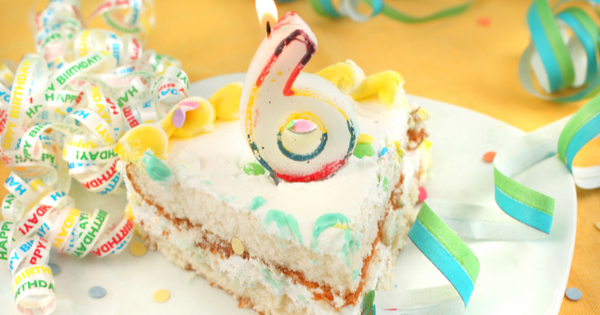 There are few times that can trigger such contradictory emotions in a parent as birthdays and graduation ceremonies. They are proud, happy moments, celebrations of accomplishments and another year passed that we have managed to keep them alive. They can also be pensive times, reminders of the rapidity of time’s passing and future inevitabilities.

This month we celebrated the little’s sixth birthday, a number that makes her little only in comparison to her older sister. Every one of these early birthdays seems a big deal, the changes to them so pronounced since their last, but for some reason six seems a bigger deal than the transition from three to four or four to five. She’s now closer to double digits than she is to birth, a realization that I didn’t much care to make.

Another big day was graduation from kindergarten, an achievement that I’ll admit I may not have placed as much importance on as some of the other parents in attendance who came bearing signs and flowers.

In retrospect, I guess I should have. Full days and no nap times make kindergarten a lot different than when I was a kid, but there is still a lot of time spent singing and making arts and crafts. I’m impressed with the math that she’s learned, amazed by her reading progress, but cognizant that next year things will be different. I’ve heard good things about her new teacher but first grade will mark the beginning of school as a place not for play but for learning.

We had another graduation to attend this week, one that I wish we could have celebrated more.  After four tumultuous years, the teenage is now officially…almost done, several papers on British Literature still needing to be finished to meet the requirements necessary for receiving her diploma.

It was a disappointing ending to her high school years, an anticlimactic mailing of certificates sometime this summer, but in the end, the desired outcome will be reached. The truth is that the past four years have been hard, hard for her and for us. As much as I would have liked more than twenty minutes notice that she had changed her mind about attending, I’m glad that in the end she decided to attend the ceremony. Goodbyes were said to classmates and teachers, tears were shed, and even if her ledger is temporarily still open, there was at least some measure of closure obtained.

Where she goes from here remains to be seen. In a few short months, she will be eighteen, recognized by the law and society as an adult, with all the rights, privileges and responsibilities that conveys.

One of those responsibilities is employment, a search that starts with an interview tomorrow. Finishing off her last remaining graduation requirements will be the emphasis of the next month but stagnation will not be an option. Change is a part of life, something that we all will be dealing with a lot over the coming year. Being able to deal with these changes, to adapt and to overcome, to continue down the path to personal success and happiness is one of the most important lessons that a person needs to learn on the journey to adulthood. It isn’t one that is always learned in school.